What's the difference between Batts, Roving, and Top?

Batts are done on a drum carder. The carder "brushes" the fiber with its carding cloth. Carding cloth has teeth that are all running in the same direction. Most carders (table models) have two drums, a licker-in and a big drum that basically holds the fiber as the licker-in "treats" it. The photo shows three rolled-up batts (Kaleidoscope, a color from Crosspatch Creations).

The Patrick Green Supercarder has three drums; and cottage carders (bigger power models) can have _alot_ more .. my Patrick Green Rover has 7 drums, and real floor-loving machines like the Patrick Green Exotica (shown in the picture) have alot more than that, even.

Given that the drums are brushing the fiber the same direction, if you are feeding in fiber all going the same direction (parallel to the brushing action) then you are very likely to get a nicely aligned batt off of the carder. But there is no 100% guarantee of this.

I find when I'm running picked fleece through the carder, I get a more jumbled result than if I'm re-carding laps (short bits of processed roving). And a second pass through of the carded, picked fleece adds more organization to it. So, batts can appear to be 'top', but they aren't combed, just brushed into a semi-organized state that can be spun almost worsted (ah, but that's another thread!) 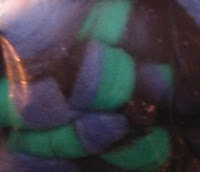 Oh .. and roving? My rover takes the fiber off and feeds it through rollers, basically attenuating the batt down into roving. "True" roving has twist added to it as well, so "really" what I'm getting is sliver to be exact. But it's not combed top, which is a different process. I can also "pull" roving off a table-top carder by dizzing it from the outer 1/4 inch of the batt and rotating the drum around again and again, dizzing around the batt and moving over bit-by-bit on each complete revolution. The photo shows a three-color roving/sliver, "A Breed Apart" another blend from Crosspatch Creations.

I have a post on pulling roving off a drum carder already, see here.

Mini rovings, called "rolags" are made with handcards. There's a great youtube video of that.

You can also hand-comb top with hand-combs. Let's talk about that one next time, though.

Feedback is always welcome -- did this spark a question or an opinion? Let me know! Thanks!

(based on a posting to knittyspins, 3/20/07)
by Amelia of Ask The Bellwether

No question or opinion, just awe. I seriously enjoy your blog. :)

Thanks! as long as we're slinging compliments, your stitch markers rock :-) I'm loving my yellow turquoise ones.