Well ... does the excuse that April has "only" 30 days help at all? I did not work on the purple re-spinning project at all; I did knit more of the unfinished tote, but it got sidelined too, so that I could write down and test my mini sweater pattern. It's been tested 4 times now, and seems to be holding up well! Perhaps that is my April unplanned-but-completed UFO, since I've been kicking it around since examining several varieties of mini-sweater starting back in January. 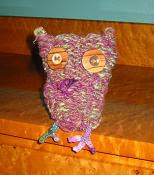 And for a photo-op, wow -- I need to walk around my house more often -- Wowl! He's even up on the Yarn Museum -- which thrills me more than I can say!! Wowl was a UFO for a while -- even relegated to the hamper-of-unfinished-projects. Because, he needed to be stuffed. And the stuffing was on a high shelf in the garage. He's stuffed with (get this!) CVM carded wool. How rich is that :-) It's a lovely brown color, so even if it peeked through you'd not know, as it blends right into his coat yarn nicely. The CVM, you see, nepped in the carding and has been relegated to spin-and-felt projects, stuffing, and the like, since I won't be able to spin a nice, smooth yarn. Fibers up on high shelves in the garage are the U'est of UFO's, so it's nice to use some of it in an I-can't-believe-it's-not-only-FO-but-also on yarnmuseum.com!

I think that the tote and re-spinning will have to be sidelined for May, back into the UFO black hole, as new projects have come up -- 4 ounces of fiber to spin samples from, my 100 needle cylinder for my sock machine to test out, and 6 samples to knit for the shop. However, going to the sock knitting machine retreat this last weekend uncovered a few old UFO's -- the handspun, handknit mermaid socks from Lucy Neatby's Cool Socks, Warm Feet are suffering terminal second-sock-syndrome -- and the Blue Moon Fiber Arts folks have already sent the second yarn, where I haven't even begun to knit the first one! yeeek. All in all, April was backward progress, if any. Well, that just makes life more interesting even if the blog entry for it is vacuous :-O

Sooo, for May ... hmmm ... Let's say finishing my Fiber Sandwich!! Yes ... and more about that will be posted on the blog during the month to boot. (What's a Fiber Sandwich, you ask? check out Majacraft's...)
by Amelia of Ask The Bellwether