What is your knitting nemesis? 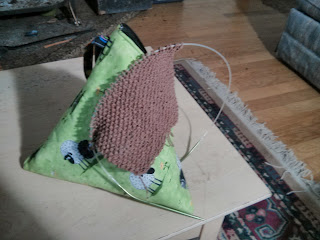 Seed stitch has always been a challenge for me to knit. So much so, I sweet-talked my mother into knitting a booth sample sock for me because the leg was all in ... Seed stitch! Ouch! I learned that my mother didn't enjoy seed stitch, either.

But somewhere along the way, my hands have apparently made their peace with the yarn-to-the-front-and-purl, yarn-to-the-back-and-knit pattern that is seed stitch.

It all started with a little class on speed knitting from Stephanie Pearl-McPhee at Madrona a few years ago. She taught us lever knitting,where one needle is stationary, the other does the work, and you minimize the distance yarn has to move. Very efficient.

One of my take-aways from the class is that the yarn is basically making the same motion all the time, which I can simplify down to a flick of my index finger when it is tensioned correctly. The second key take-away for me was that I can often combine movements: take the old stitch off the left needle while at the same time, bringing the yarn to the front to be ready for the next stitch, a purl; or bring it to the back while removing the old stitch if the next stitch is a knit. That made seed stitch as many beats as stockinette, rather than the doubling it used to be for me due to separating that yarn-to-front, yarn-to-back motion from the others while knitting.

When we learn a new skill, often it's about breaking down actions into individual steps so we can understand what is going on and have more control over the process. But mastering a skill can be about figuring out how to combine separate actions into one fluid motion to be more efficient.

Take a look at your next seed stitch project, or K1P1 ribbing, and see if you already have the combined motion down, or if your knitting can be helped by that like mine was.

My little project-in-process here is Steampunk Washcloth (based on http://zombiesknittingandtimewellwasted.blogspot.com/2013/01/steampunk-handkerchief.html) from charka-spun Peruvian mauve cotton. I picked this pattern due to the edging: less than perfect handspun tends to have wriggly edges, so by having a little edging on the work, I can even out that roughness. Worked like a charm!