What does it take to win a yarn competition?

This first photo is from last year's fair, spindle-spun singles, worsted weight -- got bonus points for spinning evenly given the multi-content of the fiber and also for the planned project -- a nalbound hat!

At the local county fair, we have several classes we can enter into,the handspun yarn categories include:
- singles
- plied
- novelty
- hand-dyed

This next photo is spindle-spun singles, Shetland, lock spun to preserve color, planned project knitting, several years back. Again, mentioning spindles and that I was spinning the locks to preserve the color helped in the final grade.

Last year I got extra points for entering 3/4 of a pound of a bulky 2-ply, as it "showed off" the consistency of the spinning and gave her a large skein to review. Yes, it was tied together to make the skein so big, in 2 places I think, it was 3 bobbins' worth.

It's not "against" the rules to go through a bigger skein and pick out the best contiguous 50 yards to enter, in fact our usual judge expects that to some extent -- she wants to see your best work, not your average.

You're only expected to have dyed the fiber yourself (at any stage in the processing -- pre carding, post carding, post spinning) if you put it in the hand-dyed category. 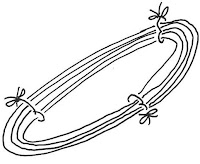 Skeins are expected to be well-prepared, which means: evenly wound into an appropriately sized skein (so, a 1 yard skein if it's a small one, a bigger 1.5-2 yard skein if it's alot of yarn). Tied with 4 "figure-8" ties around the edge (I know, the drawing only shows three...). She wants the figure-8 ties to be findable but not obtrusive -- I usually look for a commercial yarn in my stash that matches the fiber, or if I have to, cut lengths from the skein for self-ties (ouch that hurts, though in fact she prefers self-ties). The skein should be clean, hang well (balanced/twist set -- unless you can explain why it's not in the notes), and rolled into a tidy skein. The first thing she does is undo the skein back into its loops, then lays it out on the table and opens it up to see the individual yarns. 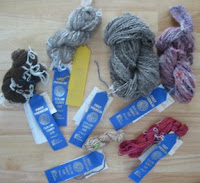 Besides skein prep, in our fair you submit a slip stating the fiber content, intended use, and any notes on spinning you want -- so I'll always note that my spindle skeins were spindle-spun. It helps alot to put in a small knit, woven or crochet sample (aka gauge swatch for my knitting, that's usually what I put in) to show the intended use or even the knitting pattern you're thinking to use it in. Another help is to include a sample of what you started with -- a lock of the washed fleece, a length of the purchased roving. Not expected, but it helps make the entry stand out.

The photo is a collection of skeins from 2002, note the small knit/felt sample with the pink skein, to show its intended use, a knitted, felted hat. The sample helped the judge see that felting with the plied silk in the wool would actually work. Note the majorly contrasting ties on the skeins -- I had points off for that :-( and I learned my lesson! So be sure to read the judge's feedback and use it to improve your future entries.

On the slip you can also state things like why you want the skein to be unbalanced (if it is), what makes it a novelty yarn (if that's your category), notes on the dyeing for hand-dyed, and note if you started from raw fleece, commercially prepared fiber, that sort of thing. Basically, the more work you did, the more highly she thinks of it and the higher it will score.

Other things you can list (but be sure to be accurate, because the judge may check!): wraps per inch, twists per inch, actual yardage and weight of the skein, staple length (ok she may not check that one!)

Hmmm, maybe next year I should include the spindle with the skein ... now there's a thought :-)

Drawing ©2007 The Bellwether. Used with Permission. From Spindling: The Basics.

(based on a post to spindlitis by me, 21Mar07)
by Amelia of Ask The Bellwether