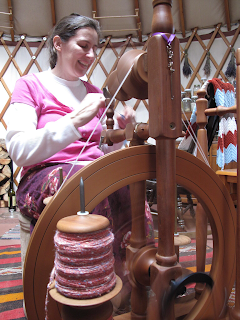 Amelia Garripoli purchased a house that came with two llamas in 2001. Her life has been a whirlwind of fiber pursuits since, publishing Productive Spindling in 2009, two spindle videos with F+W Media in 2016, and many monographs and articles on fiber arts, and on her blog askthebellwether.com. She does custom spinning, having spun 15 pounds of traditional tapestry yarn for Yael Bakal Studios' tapestries. Amelia relocated to Colorado in 2020 and is currently teaching via Zoom.
This video was recorded about my spinning for Yael Bakal Studios. Their website is yaelbakalstudios.com.
Stay and browse the blog, peruse the workshop list, register for an upcoming workshop, purchase my book, an e-tutorial, or spindles, and ask a question.

Wool shows, groups, and shops at which I have taught (isn't English wonderful?) include:

Would you like to be on this list? Contact me to have me come and teach at your event, group or yarn shop. I'm happy to travel!

Websites being what they are, I need to make sure to let you know about my policies ... grab a cuppa and your favorite snack, and hunker down to read this ...
I do my best to protect your information. That said, I use google services and paypal shopping cart -- be sure to read their policies so you understand what you are in for. As mainstream services, I find them relatively harmless. I also use Amazon affiliate links, so if you use my Amazon links, I get a small amount for your purchase. Please don't reply to emails from the lost prince of Nigeria or emails claiming I'm lost in London, and you will probably do fine.
Similarly, I ask you to respect my information -- all text and images on the blog and in your purchases are (c) Copyright Ask The Bellwether, or were used by permission. You cannot use text or images from them without express permission from Ask The Bellwether. I do give permission for reasonable requests, so don't be too put off to ask.
If you purchase from me, of course I want you to let me know what you think. If there is an issue with your purchase, I will work to fix it for you. The internet is our friend -- we can talk via skype or exchange photos/videos if needed to help resolve things. Please contact me via the contact link, mail me a letter at The Bellwether, PO Box 129, Elbert CO 80106; or call me at 360-582-0697 (Mountain Time Zone).
I aim to ship as quickly as I can, but there could be a delay of a few days or longer, if I am teaching away from the studio or on vacation. I will respond to your order as soon as I see it, if that is the case. I'm not always internet-live, so be patient. Or submit more contact forms. Your choice.
It's up to you to use your purchase appropriately. I work to do no harm and hope you feel likewise.
Workshop policies are on the Take a Workshop page.
I could lay more words down here, but would you read it? Let's all be sensible. My policy is: Sensibility.