What is a skirted fleece? 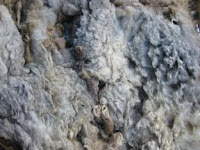 A skirted fleece is one that has been shorn from the sheep (or llama, alpaca, goat) and has had all the unusable bits removed. It's called skirting because you usually take off the outer skirt of fiber -- the stuff around the butt, the shorter/coarser hair from the legs, the really messy neck wool.

Here's a great picture of the parts of a fleece.

One of my sheep used to love to stand under the llamas while they ate, though, so I always ended up "donutting" (my term ;-) ) his wool, removing the top center of it where all the hay dust/seeds/short bits ended up.

If the shearer was an amateur (like me) then it's unlikely the fleece will still be in one cohesive piece. In that case, you end up picking through it and deciding handful by handful to keep it, toss it, or see if you can shake the VM out of it. But professional shearers take it all off in one piece, fold it by thirds, and roll it up from butt to neck -- so the outermost part is usually the neck end, should you "meet" a bagged up shorn fleece.

Now, someone hands you a raw fleece. What do you do? Skirt it, wash it, then use your nicely scoured fleece - card and spin, comb and spin, spin locks, or felt!

Start at the beginning with skirting fleece and more detail on removing hay and twigs from raw fleece.

Then move on to washing fleece, and getting muddy tips clean; be sure to consider weight loss in washing a fleece and also how to keep the wash water hot.

Typically, you card and spin washed fleece; but mohair and longwools (curly locks, basically) are great for lock spinning; and llama and alpaca are wonderful combed for spinning.

If you are interested in felting, now, that's a topic I haven't explored on the blog much yet but here is an entry on felting wool around soap!

Thanks for all the great info! I do have a question. How long can a fleece hang around and still be useful. My BIL has fleeces left over from last year. Are they worth looking at?

Short answer: it depends, and you won't know unless you look at them ... more details posted here and, thanks for asking!