How do you knit argyles on a sock machine?

Have you seen the great Sock Machine Blog, Soxophone Player? All Sock Machines, All the Time. I love it!

Doug (its author) recently mentioned he felt argyles would be a challenge. Rest easy, Doug -- they're easier than those Scotch Heels or Hand-Look Toes!

The argyle instructions I use are from the Harmony Knitter manual; it was emailed to me, I've not found it online yet. Roxana on the sock lists (sockknittingmachines, sockknittingmachinefriends) sells a Video/DVD with argyle lessons on it that is very good, and the Yellow River Station DVD has a good lesson on argyles on it too.

Now, to knit argyles like mine, you knit first two triangles from the flat top down to the points, and then knit two diamonds from the opening point to the closing point.

The way the argyles "hang together" is by always decreasing or increasing two stitches on each side, and when you move from one triangle/diamond to the one "below" it, you overlap by 1 needle -- that way you lock together the shapes as they are knit.

Handknitters often knit argyles using intarsia, which is messy -- this two-stitch decrease/increase automatically locks things together. It's a machine method that handknitters have rediscovered, so feel free to apply this technique to your handknitting to throw in the occasional row of diamonds there too! 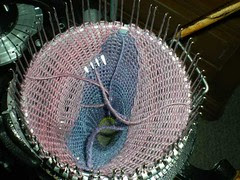 Well, having fortified myself for the first triangles, I put my yarn on the tension arm since I would be knitting the triangle back and forth, stopped the yarn carrier in front and raised the back 30 needles, then knit around until the yarn carrier was in back and not knitting. (*) I then raised the rightmost two needles and knit backwards around to the left. Once in back, I raised the leftmost two needles and knit forwards around to the right until the yarn carrier was in back and not knitting. At this point I added my heel forks to ensure the triangle would keep knitting, and repeated from (*), moving the heel weights up as needed, until I'd raised all the stitches. The last row is just 2 needles. I broke the yarn and dropped the end into the cylinder.

Whew! first triangle done, and all (yep, all!) the needles on the machine are up! The next step is the triangle at the back of the machine -- you do the same thing, but from the back. So, I kept the yarn carrier in front, lowered the back 30 needles, restarted the yarn by clipping a wooden clothes peg onto the end and putting it inside the cylinder after running it through the yarn carrier, and started knitting as above -- first round, all 30 stitches, yarn going counter-clockwise around the cylinder; add the heel weights; (**) with the yarn carrier in front and not knitting, lower the first two needles, then knit around clockwise until the yarn carrier's in front again, lower the first two needles on that side and knit around counter-clockwise, repeat from (**) until -- you guessed it! -- there are no more stitches to knit. Once again, the last row is just 2 needles, then all the needles are up, you have two triangles done!

Wow. That should feel great! Now, it's time for diamonds. Pick a side, it doesn't matter which one. Pick a different color yarn for your diamonds. For a diamond, you start with the two side stitches -- you should see that this takes 1 stitch from the front triangle and one stitch from the back triangle. That's the start of interlocking the shapes. Start up your new yarn color, and knit (yarn going counterclockwise around the cylinder) those two stitches. With the yarn carrier resting on the other side of the cylinder, put down the first two needles, move the yarn from the front of those two to the back (to ensure they will knit the yarn!) and knit back clockwise. Again, put down the first two needles from the other side of the diamond, move the yarn to be behind them, and knit counterclockwise. You'll want to add heel weights and move them up as you go. Continue increasing until you have 30 stitches. Then decrease just as you did for the triangles, until you have all needles up again! Your first diamond! 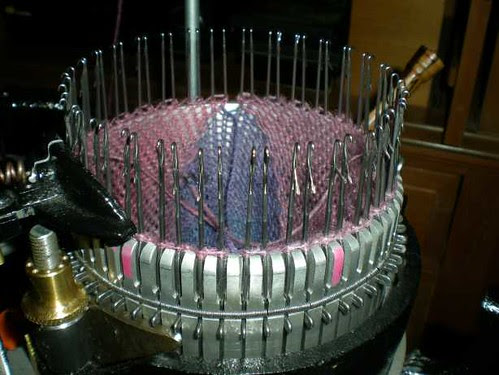 This picture shows both diamonds (pink) completed -- they don't look very diamondy yet, but they are! you can see the triangles (purple) poking up into them, too. 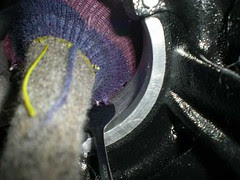 There's a bird's eye view of this state up higher too. From the bottom of the machine, it looks like this.

Now, the challenge is mostly behind you, but you still need to do opposing triangles before you can knit in the round again. So, starting with the front one, lower just the front 2 middle stitches (note one comes from the edge of each diamond -- more of that interlocking going on!), change back to your main color, and knit increases just as you did for diamonds. You'll end with 30 needles down and just knit. Break your yarn, move the yarn carrier to the back, raise those 30 needles, crank (not knitting) around to the front, lower the back 2 middle needles, and repeat the triangle in the back.

Now, when you finish the back triangle, if you are very careful, you can simply lower the front 30 needles and keep knitting around from the last row of that back triangle. Put as many rows as you want below your argyle diamonds and then knit your favorite heels and toes. 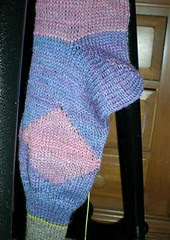 Knit the second sock while the first is still on the machine. 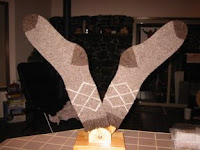 Once your socks are off, you can decide -- to add stripes or not. I have knit just argyle stripes on the sock machine before, so you could knit diamonds and stripes at the same time if you wanted to. I don't want to :-).

It's easy enough to either crochet on the stripes, like I did, or to duplicate stitch them (as recommended in some of the manuals). 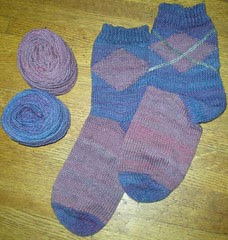 As you can see, I had plenty of yarn left over -- I could have had several rows of argyle diamonds. But, I was not sure how much yarn I'd go through, so I decided on short socks to be safe. There's enough yarn left to knit "Opposite Argyles" if I want, reversing the colors. I just may!

This pair is for me; it's sandwiched by socks for my sisters-in-law (gotta get started on the second pair of the sandwich -- the first has already been received).

My end take on knitting argyles on the sock machine? It was fun! and since it's a non-ribber operation, the work is very visible while it's going on. It was easier than the Scotch Heel or the Hand-Look Toe, even. And it went fairly quickly. Next time, I plan to knit my ends in as I go. I'm eyeing my sock-yarn-leftover bin thinking that argyles with solid color base and Opal/Regia/you name it designer sock yarn diamonds would be quite a treat!

Sock knitters (machine and hand) -- have you tried argyles yet? Any advice for me before I dive into my third pair of argyles?
by Amelia of Ask The Bellwether

OMG, that is SO cool. Thanks for that. I had to read this a few times, but I think I get it. It's basically like doing a heel decrease, sort of. I get it. Thanks for taking the time to write out these instructions.

You got it! just like heels, except you put two up or two down each time. Just remember to only put 1 up/down on the heel when you get to it ;-) or you'll have a really shallow heel (and maybe a really pointy one, too, haha)

Two thumbs up on the argyle! This WILL be very high on my R&D list. So many new things to try. So little time!

And thanks for the plug ;o)