How do you spin on the Russian spindle? 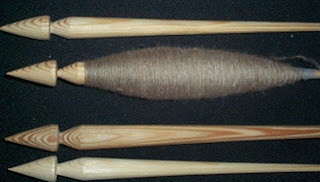 The Russian spindle is a support spindle, singles are spun similarly to the techniques used with a tahkli spindle. The traditional fiber is Orenburg goat down, though in the US, they are typically used for Cashmere, Yak, Bison, and similar short stapled, fine fibers. The cop of handspun is built up on the lower end of the long part of the bulb.

The picture above shows traditional plain Russian spindles, the one with fiber is very full!

I find it easiest to spin this wooden support spindle in a ceramic dish for minimum friction.

Plying is where the fun of Russian spindles come in, as to ply, you first take a full spindle of singles and silk thread (traditionally, though you can use what you want!) and wind it onto another Russian spindle. Yes, wind two strands together, maintaining even tension, without plying, onto the spindle!

Then, you spin counter-clockwise and lift the end off the spindle as twist enters the yarn that is being released from the spindle. Cool, no? You take that new length of plied yarn and wrap it around a "Russian plying disc", which is simply a 2-inch diameter circle of lightweight cardboard (think cereal box or the cardboard that is inside flat-packed panty hose). Then, holding the disc, you repeat this process for a new length, wind it on, and continue.

The yarn is set by steaming it on the disk, or simply mist it and leave it to dry if your environment supports that.

The spindlitis list on YahooGroups has been having a Russian Spindle challenge, uploading to YouTube some lovely videos, especially Faina's, on Russian spindling.

And then I found this variant, of Tibetan spindling:

How cool is that!

Amelia! Thank you so much for the Tibetan spindler video! She's wonderful. I may need to put her on Habetrot one of these days.

I'm not to clear on plying with tibetian spindle; do you have any visuals to see?

@Keli: I'm not sure on plying on the Tibetan either -- the video only shows singles. You could ply like the Russian spindle plying, or do drop spindle style plying, I suppose. Something to explore!

Sorry. I meant plying on the Russian spindle. I read your directions but Im a visual person; can you please show on a video?

@Keli ... thanks for the clarification. It looks like Faina's videos are down from YouTube now, sigh. I'm teaching Russian spindling at the NwRSA conference, but I'm also guessing you're not local to Washington state ... Spindlicity had a recent video on Russian Spindling (http://www.spindlicity.com/2009_01/russian%20spindle.html) though it didn't cover plying; perhaps they will have a follow-up in their next issue :-)