Why the name "bellwether"? 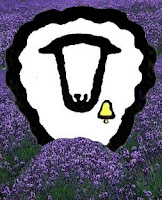 I often get asked, "What does Bellwether mean?" The answer to that is the same as the answer to, "Why the name Bellwether?"

Bellwether is an archaic word; it used to mean lead sheep of the flock. In ye olden days, the flocks were mainly ewes, and it was typically the oldest ewe that was the Bellwether. The shepherd, used to taking an afternoon nap, would put a bell on the bellwether sheep so that he could locate the flock if they wandered away.

I like to think that it meant "bell wither" as in, "wither the bell goest, so goest the shepherd" ... but I often have flights of fancy ;-)

I've been corrected many times, and told that "wether" is the gelded male sheep -- but in fact, even online definitions disagree if the bellwether is the gelded male or simply an "it" of either gender; and searches for wether show that the word may actually be related to Old High German widar, meaning ram. In my flock, leadership has rotated between ewes and wethers so in general it would be hard to draw conclusions!

Special bonus: there is an old Nursery Rhyme that has Bellwether in it:

And to make it even more appropriate, this is a traditional British knitting rhyme sung to track rounds and decreases as a stocking is knitted!

And besides, at the time, fuzzystuff.com was taken ... so was bellwether.com, so I became TheBellwether.com. Because, there is only one ;-)
by Amelia of Ask The Bellwether

Bellwether beats fuzzystuff all hollow...Thanks for an informative post! I love the little rhyme!

Thanks for clarifying that whether, wether detail!

Thanks for the post about winding on the spindles - great shot of your Turkish spindle! Great spinning!

Thanks to Donna, Kim, and Rosemary for commenting!

Another homonym is weather -- bellweather.com is a website for a hotel in Bellingham, which is fairly near me!

In the archaic definitions, they don't define wether at all, they just say "bell" comes from "belle", the archaic for bell. Sounds a bit circular to me, but then again I haven't dived into the 30 volume concise Oxford English Dictionary yet.

I would have expected them to say wether meant leader, as in "belled leader", but none of the definitions I've found have said that.

And I forgot to put in the post -- the modern meaning of bellwether is "indicator of trends". The stock market uses it alot, as in "that is a bellwether stock".

Well ... hmmm. Seems my sources have changed their definitions. Sigh. So, as Rosemary says, "wether" seems to be the way to spell castrated male.

Back to my dictionary hunt!

OK, some links for definitions (finally):

Merriam-webster leaves wether alone in its definition of bellwether. And defines wether as coming from the word ram originally (when the word bellwether was created).

So, I've updated my comment on wether vs. whether (sigh -- I'm not perfect!)

I did search into less professional looking websites too, they sometimes say wether is the castrated male, and sometimes say nothing, which I take to mean they think any flock member may become the bellwether. This matches my experience, with wethers and ewes all participating, across lines of animal as well -- goat, sheep, llama all. The pigs stayed in their own field, and the chickens never played leader except within themselves.