Beyond the Magic Loop 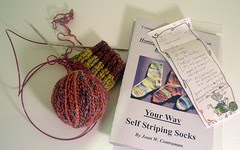 A brief history of my sock knitting ...

I started out knitting socks on 4 double pointed needles -- the work in a triangle on three, the fourth actively knitting. It was annoyingly tight at the ends of the needles. Someone suggested I try five DPNs, so I did -- much better. But those around me still had to be aware of my porcupine personality, or risk a poke if they got too close.

Then along came this amazing book, Socks Soar on Two Circulars by Cat Bordhi. I absorbed it rapidly and was happily amassing an amazing collection of circulars, two in each size. I did everything on two circulars -- socks, hats, scarves (okay, those were flat knitting, they only took one). All of a sudden, I was much more popular and less prickly.

Of course, it meant alot of my circs were too short, so they gathered dust on my circular storage solution holder (which is terrific, By The Way!)

But I still ran into a problem, when it came time to turn a traditional flap heel. In particular, when I picked up the gussets, I either had too many stitches on one of the "rows" on my needles, or had to move stitches around to balance things out, which messed up my counting for the gusset decreases. (When I knit, I don't want to have to think too hard. It's supposed to be relaxing.)

This last year, I had upgraded to the KnitPicks circulars with their very flexible cables. So even the 30-plus inch cable has plenty of give for the "magic loop". In fact, there seemed to be extra, I thought as I pondered my latest sock.
So, I tried it.

And I give you, my evolution of the magic loop, the Triple Loop: 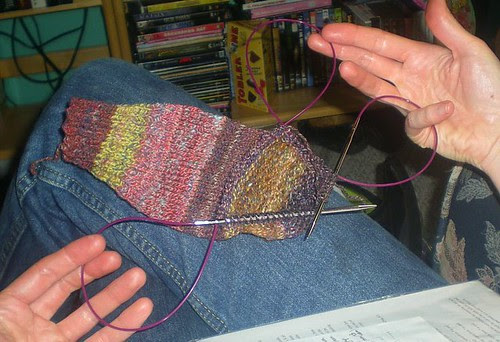 That sounds a bit like a figure skating move, doesn't it?

When I reached the gusset pick-up stage, I put the first side on the same "length" as the bottom of the heel. I then "looped" and knit across the top of the foot per normal. Then I put in a second loop and picked up the second gusset side. Once I finished those pick-ups, I added a third loop and started the round again, at the bottom of the heel. Yay! No stretching of uneven numbers of stitches, no moving of stitches, just blissful knitting. Once the gusset was done, the few stitches left on the new, short third leg slipped easily onto the bottom half to return me to the good old magic loop.

Now the sock is done ... time to cast on for number two!

Merry New Year!
~~
posted 31 December 2008 at http://askthebellwether.blogspot.com/
by Amelia of Ask The Bellwether

Thanks Amelia! I too had a problem with the traditional heel with magic loop. Might have helped if I had actually read "how" to do magic loop...

I'm going to try the three loop on my never ending Bohus cuff socks. They've been hibernating ever since the class.....

Thanks for this fantastic post - and all the others. I feel like you had, a bit lost in the circular needle thingy. Your explanations are always a huge help for me! A very happy New Year to you Amelia (see you online for a new spindle this year!) Terry

Amazing! I used to do my heels and gussets on double pointed needles, and I, too, accidentally fell into the triple loop! It's great isn't it? Easier still is to knit a short row heel for socks -- no gusset -- no loop problems.

@Michele ... umm, don't ask where mine is. I just found it buried under my weaving books (grin)!

@Ellen, yes, I love the short row heel (and toe -- Kitchener is in my blood, being English-born ;-) ) but I really wanted to master the gusset heel. I think I have it down now, yay!

I'm going to have to give your triple loop some consideration. I'm not a big sock fan but I figured out early in my knitting that Magic Loop was the way to go.