How can I divide roving evenly for a 2 or 3 ply? 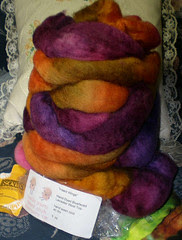 There have been some great articles written about using space-dyed roving -- Spin-Off Summer 2007, The Fractal Stripe; Winter 2008, What to look for in Handpainted Fiber; and others. Patsy Zawitowski touches on the topic in one of her videos, as well.

Several of them want you to split the roving in half and then ply the two halves together.

How can you get an accurate split?

Honestly, a lengthwise split can be quite unnerving -- I've had the fibers go from being well-ordered, reasonably half-looking to one half being the outer shell and the other some weird inner core that really doesn't want to be split from its outer shell. What a mess!

Then I saw a great post on Abby's Yarns about looking at the color changes, and splitting the fiber in half with matching color changes. Waaaay easier. That will even work for fractal plying -- split the fiber in half along its length, then take half of it, and split it length-wise, and take the other half and split it many times. You get a close-enough-to-the-original result that only an archaeologist can tell the difference. And archaeologists are more interested in bones, right.

But wait, you say, I've tried that, and my bobbins end up with way different lengths of fiber on them. What can I do?

Well, you could use a scale, weigh the total fiber, and then weigh part of it while not-weighing part, and see if you can get an even half-ers to split that way.

But what if there's no scale available?

Okay. Here's what I actually do. I take the long piece of roving, lay it all out, and take a look at it. Are there thinner spots? thicker spots? is one end thicker than the other end? These need to be accounted for in the division.

If it has a thin spot, I'll consider breaking that off (especially if it's say, a 4 ounce ball of fiber, and there are only one or three of them) and dividing it separately. If it has a thick spot, I can pre-draft that down to match the rest of it. Honestly, usually, neither of those two things come up.

What does happen, is the ends will be radically different -- one tails off to pencil roving over several feet and the other stays thick to the end. So, I fold up the thinnish end -- doubling it may make it closer to the average thickness, say, and then I split my roving.

Wa la! I'm off and spinning ... half onto one bobbin, half onto the other. Now, besides getting the same amount of fiber mass onto each bobbin, there's another concern -- I also have to get the same yardage. That's not easy! That means I want the same thickness and same amount of twist. Both are important -- more twist in one means it's a denser yarn, which means, it will be shorter than the other at the same thickness. Uh-oh. Not to mention what that does to my plying. So I pay attention to those things, I have an early sample I save for spinning the second bobbin, and I put a whole lot of hope into the effort. 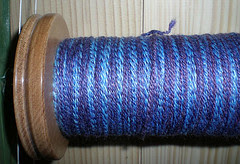 After doing this fairly often, I have found much value in all that practice -- what used to be waaaay off is now reasonably off. They don't match up. If I'm lucky, it's just a few feet difference -- that has happened. But usually, it's a few yards. So, I wind up the remnant of the longer bobbin onto my hand in an Andean plying bracelet, overlay the final end of the longer bobbin on top of the end of the shorter bobbin for a few inches, and keep on plying that final length onto itself until I reach the end of the second bobbin. All used up, all apparently even. Whew!

Now, that's fine if you were doing solids, or randomly plying colors. If the length is all one color, it works fine too. But if it changes color, or you were plying two different colors to each other, you may find instead you want to ply that final bit on itself and keep it separate from the rest. That works too. Break it off of your plying bobbin, wind it into an Andean plying bracelet, grab a spindle or an empty bobbin, and ply away.

But what about 3 plies? I'll do the same eye-balling for dividing my fiber into thirds, with special attention to the ends of the length of roving. And I'll spin each pile onto its own bobbin. Then, the plying starts. Eventually, one bobbin ends, and two bobbins still have yarn on them. This, is what I do:

I take the fuller bobbin and wind it into an Andean plying bracelet there-and-then. This can be a bigger bracelet, or not if you were lucky, so the Andean plying paperback may be called for to protect your middle finger from strangulation. I lay the end of that fullest bobbin over the end of the finished bobbin in my plying, and keep on 3-plying: 2 strands from the Andean Plying Bracelet, one strand from my other remaining bobbin. Yay!

If the Andean Plying Bracelet comes to an end, you have some choices:

If the small bobbin comes to an end, then about all you can do is made 2-ply with the remains of your Andean Plying Bracelet. But see above -- that's actually a handy idea!

So, no, there is no magic method I've found for reliably dividing yarn into halves or thirds. Just some options on how you can deal with what's left over when the first bobbin ends. What do you do? I'm always up for more tricks for my toolbox!

Hey, did you see? I have a piece published in Knitty's Winter '08 Issue:
Spinning on a Notchless Spindle
Woot!
by Amelia of Ask The Bellwether

Wow, genius! Thanks so much!

I very much appreciate you taking the time to write this up -- it's most helpful, both in the original dividing end and in the, well, end end. :-)

I'm bookmarking this page so I can read it seven times so it will sink in, and now I'm off to read your Knitty article -- congrats!