Do you have advice for teaching a child to weave? 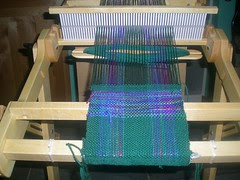 In my last weaving post, What can I do on a rigid heddle loom?, Julie asked, "I'm also interested in loom books. My 7 year old budding spinner just got a cricket loom for Christmas and I've never done any weaving!! do you have any starter suggestions so I can help her a little more?" (picture is my own Schacht Flip, weaving in progress by my son)

Hmmm, seven years old ... okay. Since she's spinning, obviously she loves fiber, grin. And your spinning is lovely too (yep, I peeked ... lovely shawl from handspun Optim!). So, first up: don't be afraid to use handspun for weaving. On a rigid heddle, I'd stick with uniform/consistent handspun or commercial yarn for warp, use more textured stuff for weft. My personal yarn stash is big enough that I can find matching commercial warp and handspun weft without too much trouble -- and I identified a huge swath of yarn I was willing to let others use, so my kids have free rein with that. It gives them a lot of choice for their projects.

Second: listen. My son said, "I like played"... after I figured out that "plaid" was a Book Word for him (read but never heard) and got the pronunciation down, the rest was history: a matching solid and multi, stripes in the warp and weft, and we were in business. I freely admit, I "helped" the project along: wound the stick shuttles with consistent amounts of yarn to make the stripes in the weft come out the length that matched the warp widths; did some of the "more boring" weaving in the middle so he could get back to the interesting edge stripes.

(To be sure, true Scottish plaid is woven in a 2/2 twill, but I figured doing it in plain weave wouldn't have the Tartan police after me anytime soon.)

But I let him learn about selvedges, I didn't go back and fix things but gave him all the advice I had on the topic:

By the time the scarf was done, heck, even a foot into it, his selvedges neatened up and it was very nice "first scarf" work.

Terminology's probably the biggest thing. The Cricket Manual has the basics; Handwoven's website has a writeup on terminology along with their other helpful tips on getting started with weaving. 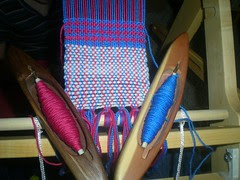 All the other advice I might give is general -- give her options, help her plan projects (always add extra warp -- I'm just learning this myself!). Color-and-Weave CD

is a terrific book, and it's out in CD now with color pictures. It seemed so funny, to read a book named "Color and Weave" but have it contain only black and white pictures -- but the old weaving books are all like that. What luxury to have the color pictures in books and online today. I'm glad they did this updated version of it!

That weaving above is my daughter's on the Flip, the warp is 2 strands of each color across, the weft is two shots of each color. We kept the shuttles one on each side, so you send one across and back to its "home base" and then the other across from the other side and back to its "home base". That way, you keep the two shuttles separate and minimize confusion. We hung mini totes on each side to hold the shuttle not in use, too, with the Flip on its stand that worked out really well.

Handwoven magazine may be a bit extreme for rigid heddle weavers, but I noticed the recent issues seem to have useful things. Apparently those crammed-and-spaced scarves are really popular, and eminently do-able on a rigid heddle (here's one from Schacht). And here's have another rigid heddle scarf on Handwoven's website. Then there's WeaveZine, a great online weaving magazine; Weavolution will be along later this year, perhaps many project ideas will appear there. In the meantime, Flickr has a rigid heddle weaving pool, plenty of color ideas to garner from the pictures there!

The Schacht website has some interesting easter eggs too -- Jane Patrick's blog, Violet Rose, features rigid heddle projects from time to time. Their past newsletters contain a variety of weaving projects, some RH, some other looms. And they've started up a new weaver's post too, this first one is about that subject, selvedges!

There are so many ways to play with color, just in plain weave, that more advanced things like pickup sticks or second heddles don't have to be pushed onto the beginning weaver unless she wants to play with them.

Hmmm, seven. I keep trying to think what my daughter would or wouldn't "get" at that age (mine's nine). The warp worksheets are pretty intimidating ... so I stuck with some general guidelines, like, ends per inch for plain weave are usually half the wraps per inch. Expect about 10% take-up in length and width (more if the fiber felts, just like in knitting-and-felting), and expect the Cricket's loom waste to be about 1-2 feet in length.

My daughter spins too, and wraps per inch is something she's used to seeing me do and talk about. I did direct warping with her -- we both loved it -- she's seen me wind a warp on a warping mill before, though, and wants to try that sometime herself. So, I know we will, with some future project. Direct warping is what's described in your Cricket Loom Manual.

I get a lot of mileage from doing things and having her want to do them, too, though -- since your daughter is weaving "before" you, perhaps step in to learn alongside her if it interests you, or just be prepared to help out with the math steps to make sure she has enough yarn for the project. I'd note, woven fabric tends to be thinner than knit, so if you have enough yarn to knit a scarf, likely she'll have plenty to weave one. 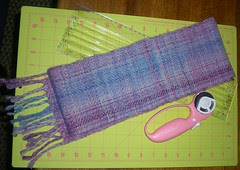 I just wove a nice long scarf (pictured) from 2.4 ounces of handspun; knitting the same would have easily eaten up 4 or even more ounces of the same handspun, albeit it would have been a thicker scarf.

Fringe can be interesting to play with in scarves, too -- a simple knot is very do-able, and you needn't hem the woven edge then. I have a fringe twister and love playing with it, but I expect DD will want to braid the fringe on her scarf, as we are all-braids-all-the-time right now. DS took the knot route, as he wanted to do it himself but also wanted it done right away.

One rough way to plan, is, weigh an item like the one you want to make -- then if you're working with a same-ballpark yarn size/density, you'll need about as much by weight, plus say 10-20% for waste/safety, to make one like it. True for knitting, and I'm thinking true for weaving too -- though no-one's suggested that to me (so far).

A fun thing to try is the magic of finishing -- consider combining feltable and non-feltable yarns (superwash, silk, tencel) across the warp for a scarf that will pucker and frill once it's washed. Wow! 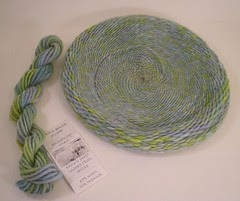 Well, all of that is pretty focused on the loom she has. There are also some fun books for other types of weaving you can do with tools you already have -- Time to Weave

. Both come quickly to mind as fun, interesting books that have projects that could pique both your interests. Weaving Without a Loom

has the terrifically fun woven tam shown here, woven on a cardboard template. 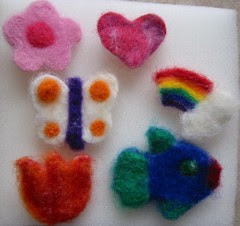 All in all, don't push her -- she may only weave now and again, children have a ton of interests. Mine might spin, weave, crochet, felt, or knit in occasional spurts over the course of a year. It's always a pleasure when they pull out their wheels/needles/loom and have a go, but I don't want to make it something they're required to do. I just make sure the tools are accessible to them so they can create when the urge strikes them. They love going to shows with me and showing their skills to others who appreciate it.


posted 8 January 2009 at http://askthebellwether.blogspot.com/
by Amelia of Ask The Bellwether

Thank you so much for your thoughtful advice! Yes, she does love her fiber, and is looking forward to using her handspun. And, after knitting for many years, I have a substantial pool of yarn for her to use. Imagine that.

Funny, yesterday I picked up You Can Weave! from the library. She enjoyed looking through it with me and pointed out the kind of weaving she did in art class at school. I will check out your other suggestions as well. And I imagine the weaving will be like the spinning, done in short bursts as she is moved to do it. I learned from the older child that it doesn't work to push her.

Thanks again! I really enjoy your articles!