How do you prevent a hole at the heel on the sock machine?

I've been knitting a few socks lately (as you saw in Sockcess! earlier). There were two things I had to re-teach myself after many months (was it a year? no! say it wasn't that long!) Preventing the hole at the heel, was one of them. 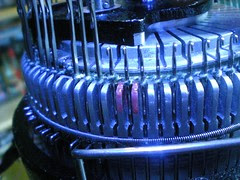 First, when you start the heel, normally you would lift half the needles out of work, and keep half in work for cranking out your short row heel. However, to prevent a hole, you keep one extra stitch in work on each side -- one past the hash mark. This picture shows the left side of the heel, with one needle past the hash mark also down. (Why yes, I am knitting the heel in that picture with the ribber in place -- daring, I know. The ribber is in the "out" position so its needles won't knit, and it "floats", or just goes where it is randomly pushed as I crank left and right, without doing anything. Kinda fun, in a scary sort of way ... This was a happy heel, nothing dropped!!) 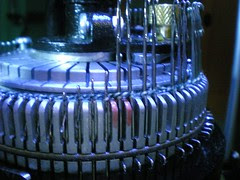 When you knit after lifting two needles, both are wrapped by the yarn, as shown in that picture. Only on these first two passes do you lift a pair of needles. After that, the rest of the decreases are done by lifting just one needle on each pass. 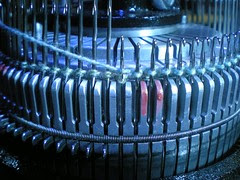 Here's a tip from Pat Fly that I didn't forget ... when I've finished the decreases, I increase by putting the first needle in the round back into work, with the yarn coming underneath it. The yarn then wraps around the latch and knits as I come back across. This is faster than wrapping the needle manually each time, and as long as your yarn tension stays sound and you don't put the needle quite all the way down, the yarn will neatly wrap the latch for a faster heel. Click the picture to see the latch more clearly (larger).

This is not quite as fast as Roxanna Baechle's fast heel, where she puts down the last stitch in each row (starting when she lifts the last needle to be lifted in the heel), but I like how it keeps the heel turns closed so this is my preferred "speed heel".

When you are increasing, you stop increasing at the hash marks. So, the outermost wrapping on the needles outside the hash marks on each side is not knit again until you make the first post-heel full trip around the cylinder.

If you still have a hole after doing this, or if you've forgotten to start with the extra needle down, there is one more thing you can do:

When you are ready to go all the way around again, then for each of the final heel stitches, on their hash-mark needles, pick up the stitch below the one on the needle at the hash mark, and put it on the first stitch for the top of the foot (the outermost needles just put back into work, before they are knit). This pulls the knitting across the heel-turning a bit more tightly to keep the hole shut.

The socks at the top were knit for my MIL, recently returned home from a brief hospital stay, from merino/bamboo. I used Soxophone Player's mock rib hem and stockinette foot, as I expect MIL would prefer a smoother surface to her sock and a bit less squeeze than my normal ribbed leg. These were such an easy pleasure to knit, without the ribber, that I may make my own next pair this way. I used the hole-less heel and Pat Fly speed heel methods as described here, as well as the no-dog-ear toe that Gay showed me. What's that, you ask? Stay tuned ...
~~
posted 27 January 2009 at http://askthebellwether.blogspot.com/
by Amelia of Ask The Bellwether

Oh how I'd love to try that. Unfortunately, the CSM I bought seems to be missing a part or two...like the ribber. wah.