What are Danish Medallions? 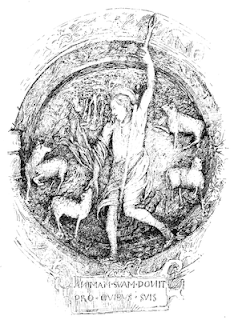 Danish Medallions are a hand-manipulated weaving technique usually grouped with Lacy weaves like Leno and Brooks Bouquet. However, they add a layer above your ground weave that lets you make etch-a-sketch type designs, with a little planning.

Okay, so you are daVinci on the etch-a-sketch like this fellow. I, am not.

In most weaving books, they show you little squares made with Danish Medallions and maybe go so far as to make them staggered like brick-work or placed in a simple design rather than arranged as a grid. But in Weaving: A Handbook for Fiber Craftsmen

, Shirley E. Held shows that there are other possibilities ... a "heart beat" of short and long pulses. Or a "Crow's Foot" that could be combined with its reverse for a starburst shape.

So, I plan to go on an adventure and see just what I can do with Danish Medallions.

If you'd like to try them out too, here are some articles I've found on-line:
Weaver-Manipulated Lace Weaves by Robyn Spady, WeaveZine Spring 2008. On a Rigid Heddle Loom.
Practical Weaving Suggestions, vol. 1-69, by Mildred Dexter. Nice diagrams of this technique.
Special Lace Threading by Osma Gallinger Tod, undated. An older pamphlet, a bit terse. On a 4-Harness Loom.

And for inspiration, here are Chocolate Trudi's voyages into Danish Medallions.

~~
The medallion shown at the start of this post is The Good Shepherd, central medallion from the vault of the Grosse Horloge. It is from the Project Gutenberg eBook, The Story of Rouen, by Sir Theodore Andrea Cook, Illustrated by Helen M. James and Jane E. Cook.
~~
posted 20 January 2009 at http://askthebellwether.blogspot.com/