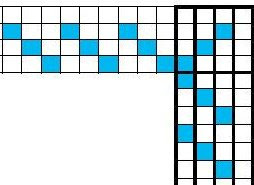 Just found your very enlightening description of reading a RHL 3 shaft draft! Cant wait to get to the loom.