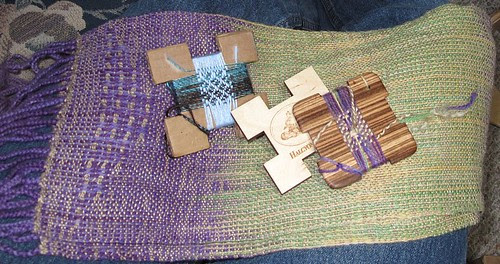 Wanda emailed me after the post An idea for a project (or two) and asked me about the woven swatch shown in the photo there. It's the one on the left in the photo above, blue/black bamboo handspun singles and 10/2 pale blue bamboo millspun, woven in a pattern called crepe from a project kit.

The square is made from thick cardboard packing I had on hand. It's a version of the sample square Halcyon Yarn sells, they call it a "sett tool".

I purchased theirs as well, but it was backordered at the time -- thus the cardboard ingenuity :-) And I'm glad, because I can leave it on the cardboard if I want. There's an infinite supply of that around here. The instructions suggested taking it off, and washing one sample but leaving the other (woven on the other side, the same) unwashed, to compare. At one inch square, measuring for shrinkage would seem to me to be pretty inaccurate, but what the hey. I did remove and wash one sample I made, a huck lace sample, and the washing did change the lace, so from that regard it was useful.

As you can see, I've also found a lovely one in Zebrawood. I used the two-sided feature of that one to try out two different weft yarns for my scarf (shown finished, with braided fringe, below the squares). The one on top, won -- tussah singles.

The indents on the sides of these are one inch, so you wind as much yarn as you want your ends per inch to be around in one direction, North-South, for your warp, and then needle-weave your desired pattern around, East-West, for your weft. That could be back-and-forth as I did in the right-hand one, or around-and-around as I did in the left-hand one.

The other day, though, nursing a spring cold, I didn't have the sample squares on hand, but rather my little 2" weave-it. I use it for samples for my booth at shows, for the fibers I sell like the two solid color ones shown on both sides in the picture. It turns out also to be helpful for sampling color & weave combinations ... my plans to weave a lap blanket in double weave reached a new information point: the estimated warp need is 1200 yards. My skein of Double Dip is 500 yards, so that's three more packets of fiber if I roughly double the yardage for the weft as well -- the perfect opportunity to add a second color. Ode to Denim looks like a nice partner for it, so that's next up on the wheel :-) 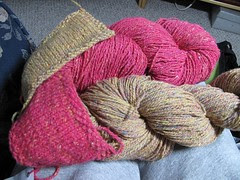 They look like they'll do well in the Scottish Twill check pattern on the left:

And, you guessed it, my copy of Color-and-weave II

showed up recently ... I was pleasantly surprised to find that it is not actually a volume 2 to her earlier work, Color & Weave, but rather revisits the weaves there, expands on the ideas, drops some repetitive material, and explores additional patterns with more complex weave structures. Definitely a book to grow with!

~~~
posted 11 April 2009 at http://askthebellwether.blogspot.com/
by Amelia of Ask The Bellwether

I'm very interested in the swatch / sett tool. I've got a project that could do with testing out like that.

What a nifty gadget! Thanks for posting about this. (I will probably try the cardboard version.)