Worth the Price of Admission

The absolute highlight of my round of NwRSA classes was when a participant said "that was worth the price of admission" on one of the spindling techniques about halfway through Productive Spindling. She was thrilled! So was I! It really brightened all my classes for the weekend. 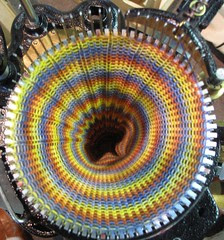 Next up was a very color-filled weekend at the CSMSA 2009 convention (that's Circular Sock Machine Society of America). I had a round of dye classes planned, and we all had much colorful fun, as you can see in my flickr set CSMSA 2009.

However, the days were even more colorful than planned ... the delightful Helga shared her ball dyeing with us!

You guessed it -- that was my "worth the price of admission" moment. 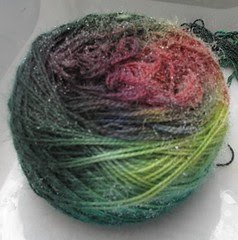 Helga has outlined the steps for this on her blog, ansichtsachen. Oh yeah -- Helga's German :-) the blog starts in German, the second half of each entry is in English.

Here you see my ball, after all the dye was in and it was set. We set our dyes using my dye microwave. I was worried about my usual 2 on/2 off/2 on/2 off/2 on not being quite enough for this tightly wound ball, so I added an extra 2 off/2 on at the end -- everyones' ball rinsed cleanly, so it worked! 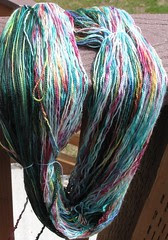 Here's my yarn, skeined. You can see it's fairly white -- all of that was on the inside. Actually, there isn't much white. My second ball (who could resist? not me) was much richer color inside to out, and some of Helga's students got thorough coverage the first time out. The trick is, not to be afraid of the dye. Go for it, and have fun! 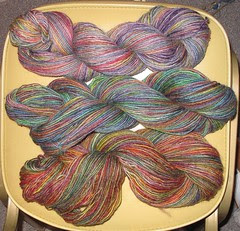 ~~
posted 13 June 2009 at http://askthebellwether.blogspot.com/
by Amelia of Ask The Bellwether

Amelia,thanks for the link. Question: when you put the balls in the microwave to set, did you cover them with plastic wrap? How long and at what heat did you set them? Also, how long did she soak them, and I assume it was in hot water? My hunch would be that the longer you soaked the balls, the better coverage you would get on the insides.

Hi Amelia! Your spindle and drum carding classes were wonderful! Thanks so much for sharing your knowledge and bringing all the supplies and equipment. I know that wasn't easy, especially being on the third floor, and with the 90 degree heat!

@Peg ... We didn't cover them, just had them in plastic pots. They were "sopping wet" -- we drained off excess water, but didn't squeeze them out before putting them in.
The key there is to make sure they are wet; and to have a dye only microwave. Plastic wrap keeps the water in if it is an issue (a squeezed-out skein) -- but for us, it wasn't an issue -- the balls stayed wet through all the cycles. I put the lengths used in the blog post, the setting was High. It's 4 2-minute microwavings with 2-minute rests in between.

The pre-soak was overnight, in water with washing up liquid (Synthrapol, if you have it, is the best) and vinegar. For a soak that long, it will cool to tepid, so you could start out that way if you wanted. Helga said that a minimum 1 hour soak would be okay, but 2 hours was the minimum she would do. Mine, shown here, was soaked about 3 hours before dyeing.

I've been considering dyeing some
balls to weave with. There is such rich color variation, they'd likely have to be a nice simple plain weave to show off the colors. And a 2-strand ball, like we did for our socks, would be perfect for matching warp and weft.

@Heidi: Thanks so very much. I had a really fun time, all the participants were lovely: all smiles and positive "I can do it!" attitudes. I know I had my positive attitude firmly "ON", especially when it came to adjusting several of the drum carders -- we did it, thanks to my adjustable wrench, a very handy tool!