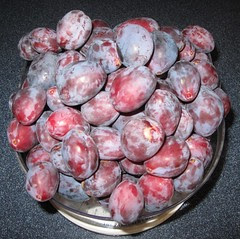 When I was a young girl in Massachusetts, my father would bring home bushel-boxes of Damson plums from trips to Maine in the fall. My mother would spend the next day over the sink and stove, sterilizing the jars and cooking the plums into lovely plum jam to refill them. We all pitched in writing the labels, so ours were adorned with a variety of handwriting from adult to pre-school. I remember that jam well -- we spread it on our toast all winter long and we made jam tarts next to the mincemeat pies in the mini-tart pans at Christmas time.

Making jam is becoming one of those lost arts ... all the ladies that bring jam in to the county fair have white hair, and the spidery handwriting on their labels shows they did all the work themselves, no helpers in the kitchen.

My love of plum jam has not left me, so I have always scoured the market shelves looking for plum jam. In the last few years, it has gotten harder to find. So, this year, when I noticed the lovely plums on the tree in the empty lot next to me had no-one to collect them except deer and birds, I resolved to do something about it.

A bucket-full of plums later, there was plenty for my jam cooker -- a heavy duty stainless steel pot with a clear glass lid, picked up at Goodwill for a song -- one of those lucky finds you don't pass up. I'm certainly glad I decided to get it, as it's been a very helpful pan, and when I saw the price of new ... I was really thrilled someone had donated it to Goodwill.

So I filled up my sink with hot water for the jars, fired up the stove, and put together my jam in my cooker:

I cooked my jam the way my mother did -- mashing the fruit as I went, stirring it occasionally, not wandering away. The pips eventually separated and rose, so as I stirred, I fished them out.

A couple of saucers tucked in the freezer sufficed for jam testing. As last year's blackberry jam was a bit overcooked, I decided to stop early this year, when the jam started acting jammy on the frozen plates.

It was a good sign that my jam, right down to the last spatula-scraping, exactly filled a dozen 1/2-pint jars to 1/4 inch from the top ... and that all 12 lids "popped" during cooling, so they've all sealed themselves until their turn comes. 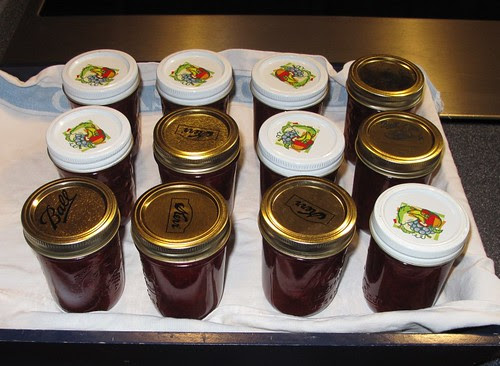 That jam sounds wonderful, and it is made even better by the fact that you were able to do so much with materials that could have gone to waste.

Oh, I still make jam and I'm not white-haired - yet! LOL! Isn't the sound of the lids popping one of the most satisfying things in the world? I make some Asian plum sauce with some of mine this year -added some 5 spice powder and crystalized ginger; we'll see how it comes out.

Ah, you have made me long for the rich taste of plum jam! I don't know of any plum trees, though perhaps a trip to the farmers market will suffice... there just aren't many fruit trees around here. Seems the developer's desire to put the largest Macmansions on the smallest plots have taken over from what wildness or farminess there might have been. Oh, I can't wait til Saturday!

Beautiful jam! Brings back memories of my mother and making plum jam from the tree in the vacant lot next door. No more mother and no more vacant lots next door, unfortunately.

I love plum jam too - and yes it is a bit harder to find now. I made some wonderful strawberry jam this year, enough to keep us going for a looong time!

Your jam looks lovely. I would imagine that cooking the plums with the seed in also gives the jam a bit of a different taste. Thanks for the recipe I will give it a try.
I have been canning too this summer and am glad to see how many bloggers have been doing so also. Nice to keep it alive isn't it?
~ ~Ahrisha~ ~

I'm definitely not white haired or spidery handwriting lady yet! I can a lot! In the plum department,I make plum sauce and plum/apple chutney. Just yesterday I made crab apple/applesauce. It tastes great and it feels so satisfying! Good for you, keeping up this tradition and creating something more wholesome and creative than what can be purchased at the store. :)

Amelia, I thought for a moment you had dyed a pail full of Easter Eggs! Then I thought, those colors would make for a lovely yarn. And finally, I realized you really were talking about plums and plum jam.

I gave up jam making when we moved from the house that had 33 fruit trees crammed into the back yard. Until now, I haven't missed the Every Sunday Afternoon in Summer Jam Activity, but I admit you're making me a bit nostalgic.

Homemade jam. Yum. My mother used to make it, and I've made it too, though not for years. The hard thing about doing it is that it's long, steamy, hot work, and it's typically done during the summer, when it's hot and humid anyway. The results are delicious, but I can see why a lot of people would say, "hmmm, why not just buy?" Too bad.

Yum! And lucky you to have it fit 12 jars exactly.

My verification word is flazo. I wonder what kind of dish that is. It must have plums.

Your jam looks and sounds delicious (plum is my favorite). I can a lot (and enter my canning at the fair!) and I just turned 32. You may be interested to know that the food safety recommendations have changed over the years and processing in a boiling water canner is now recommended even for jams. Here's a link to an excellent site with updated information:
http://www.uga.edu/nchfp/how/can_07/plum_jam.html

If you haven't already, I would recommend reading up on it. Hope I didn't step on any toes. Happy canning!