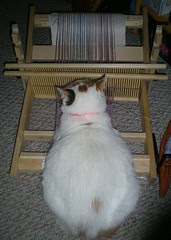 Now, I realize I was likely to be off, in my posts explaining weaving drafts and using them on the rigid heddle ... and, it turns out I was. I do appreciate that being pointed out by commenters, even anonymous comments I've chosen not to publish so as to spare my audience.

So, with apologies, here you go ... a straight(er) mapping of terminology, between table/floor looms with multiple harnesses/shafts (shaft being the current popularly preferred term) and rigid heddle looms.

Rigid heddle looms are called rigid heddle because the heddles are in a fixed location -- they are evenly spaced in a fixed, stiff bar. That piece, the "heddle" as it is often called by rigid heddlers, functions as the reed, the heddles, and one shaft (or harness) in the rigid heddle loom -- it's doing three different jobs! This makes these powerful little looms.

On a multi-shaft (sometimes called multi-harness) loom such as a table loom or floor loom, the heddles sit on several shafts, and they can move. So, you can put a few in a row on the same shaft, then a few on another, and so on, for more complex patterns. Each shaft defines a particular pattern of warp threads; shafts typically can be lifted alone or in combination with each other. These complex patterns are also made possible because you can alter which shaft (sometimes called a harness) you lift, and lift more than one at a time if desired as well -- on the rigid heddle loom, you can only, and always, lift [or lower] the half of your warp that is in the holes of your [rigid] heddles. The ones in the slots stay put.

The table loom's reed is like a long row of fixed slots -- all the warp threads go through it. It is used to beat the weft threads into place, since the shafts (or harnesses) are fixed in place, not moving forward.

On a rigid heddle loom, if you try to skip heddles, you end up with visible gaps in your weaving -- possibly intentionally like the spaced-warp/spaced-weft scarves that have been seen on Schacht's Newsletter, in Handwoven, and possibly other places as well (someday, I'll try one too!)

Let's check out the rigid heddle itself again ... actually, you see, it's a bunch of heddles fixed in place. And the Rigid Heddle Loom is also unique among looms in that it may be the only loom where warp threads are commonly not placed in heddles at all, but ride free in the slots between the heddles. The heddles are rigid in two ways. Typically they are, these days, hard plastic, unbending and not flexible; nothing like the texsolv or wire heddles on table and floor looms. And second, they cannot be slid left or right to put more than one thread next to another. Rigid Heddle weavers have to experiment with other solutions -- multiple warp threads through a single heddle-hole or heddle-slot; skipping a heddle-hole or heddle-slot; or combining those two methods.

Now, Rigid Heddle looms can be more complex -- two or even three heddles have been used on them; and pick-up sticks make possible patterns that would take 24 shafts, or even more, on a multi-shaft loom. I've kept it simple, at one heddle, for the sake of this mapping of RH loom to multi-shaft loom.

I have not yet uncovered any discussions comparing rigid heddle looms to multi-shaft looms beyond my own simple postings on this blog on the topic. Interweave's Handwoven magazine occasionally publishes side-by-side patterns for rigid heddle and multi-shaft looms, which may help one learn how to make that mapping for more complex patterns. If you have found a discussion mapping the two types of looms, please do post a link in the comments, so that Anonymous and I can both be enlightened, along with the other readers of this blog. My thanks!

~~
If you would like to see my earlier Rigid Heddle posts, as well as the websites on Rigid Heddling I've collected around the internet, I keep a "running log" on tumblr, you can find all of the posts and links here:

And to all commenters: your comments are *always* welcome, even if they are chiding me. I welcome your adding a name or link to your blog in the fields comment entry supplies for those, rather than posting anonymously. Links are great, because then I can send you a personal thank you note as well as discovering the wider world of bloggers out there -- it's always fun to see others' creations.

That's our little cat Anna in the picture at the top, warming up my just-warped Glimakra Emilia loom before I dove into weaving a scarf for my MIL from handspun superwash merino. It turned out great!
~~
© 7 September 2009 by Ask The Bellwether, posted at http://askthebellwether.blogspot.com/
by Amelia of Ask The Bellwether

Thank you so, so much for this post and all the information. A huge help to me to have all this information. I really appreciate all the time and effort spent to produce this post.

@Casy, I, too, have researched rayon chenille and not found a whole lot out about it. However, a new look today, on Weavolution, came up with a group focussed on this type of yarn and their discussions.

You can find the group's discussions here:
http://www.weavolution.com/node/2838

And its home page here:
http://www.weavolution.com/node/2831

They talk about taking a 1200-1900 yards per pound chenille yarn with a sett (ends per inch) of 18 -- it make take two heddles to get that fine a sett, on most rigid heddle looms. Once you have the ends per inch, it's a matter of beating the weft in place to match (and get 18 throws per inch). I'd really recommend reading the weavezine group, they give far more details on fringe, finishing, and other rayon chenille challenges...

Hi, this is Anonymous. These are very helpful definitions, thank you. I thought Anonymous was my only choice, because I don't have a Google account, OpenID, or URL, but now I'll try Name/URL and see if I can include a Name without the URL. Sorry if it appeared that I was chiding, but I do think your vast experience and knowledge sometimes makes you forget what it's like to have a total-beginner's 'blank slate' as far as terms and techniques go.

HELLO MY NAME IS FERNANDA I'M FROM QUITO, ECUADOR. I'M A WEAVE ADDICT.

I LOVE YOUR BLOG AND ALL THE INFORMATION I COULD FIND IN IT.

I WANT TO ASK YOU MORE INFORMATION ABOUT WEAVING ON RH USING PICK UP STICKS, IF YOU CAN PUBLISH MORE PATTERNS AND SO ON BECAUSE HERE IN ECUADOR I CAN'T FIND THE BOOK "TEXTURES AND PATTERNS FOR THE RIGID HEDDLE LOOM" THAT YOU MENTION.

I REALLY APPRECIATE YOUR HELP THANKS IN ADVANCE.

(SORRY IF MY ENGLISH IS PRETTY GOOD)

Thank You!
Seriously, not only for your earlier RH posts - the second was the most helpful for me because you "mapped out" your warping up. But also this post clarified bits & pieces that my little mind simply went *eh?!* when thinking about drafts and conversion and . . .

Thank You Thank You - and I look forward to more RH posts!!