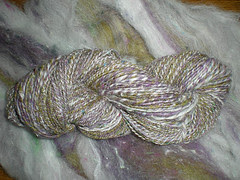 Wool roving can also be directional -- not always, but sometimes, depending on the carding equipment. The thing with wool roving is that it usually contains jumbled fibers anyway, so the texture from spinning it can be attributed to the jumble as much as the carding direction – so it’s not usually much of a concern. I learned about direction in roving from a very experienced friend of mine (Joan, the lady behind Crosspatch Creations), who sends much of her wool off to a mill to be carded, and has found that she can get a more even yarn when spinning from the “right” end of the roving. She also told me that directionality in roving is not always present, that it does depend a fair bit on the carding machine.

How can you tell which end might be better to spin from? Without spinning, run your fingers gently along the surface of the roving in each direction; one should feel smoother than the other – start from the end you started the rub, in the smoother direction.

When spinning, if the drafting feels start-and-stoppy, try spinning from the other end, to see if it is smoother.

Not all roving will seem to have a direction – it depends on the machinery it was carded on, some tend to impart more direction than others. The wool/fibers involved may also affect it (what they are, how jumbled they are, how carded they are) So if it feels the same both ways, dive in, and see how it spins.

I have not read anything about commercial top having a smoother direction, but I wouldn't be surprised if it, too, was occasionally directional. If you try it, I'd be interested to hear what you find.

~~
This post inspired by a recent question on the Ravelry group Wannabee Spinners
~~
For related posts, see: What fiber preparations are there?
~~
© 8 January 2010 by Ask The Bellwether, posted at http://askthebellwether.blogspot.com/
by Amelia of Ask The Bellwether

This is what I tell people to do with cotton sliver. They don't always believe me, but it works for me

When I first started knitting, I read a claim that every skein of yarn has a direction. The author suggested running your fingers along the yarn, first in one direction, and then in the other; and then knitting in the direction that felt smoother.

I checked religiously for years, and found that while that claim was vastly overstated (many commercial yarns, particularly but not exclusively the synthetic ones, have no direction I can discern), it's not altogether untrue. Although I've never heard that hint from any other source, I do find that — depending on the yarn structure, spinning method, and fiber content — the direction in which one knits the yarn can make a difference to the finished fabric.