Where does 'tabby' come from? 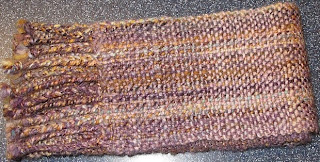 In the last offering of Weave Now: Basic Rigid Heddle Weaving, a question came up that put me to researching: Where does the term 'Tabby' come from?

I felt that it was likely it had a non-English root, given it sounds nothing like "Plain Weave", which is what tabby basically is. In fact, it comes from an Arabic place name where a striped silk cloth was woven.

According to the Online Etymology Dictionary,

The English word tabby is from the French tabis, "a rich, watered silk (originally striped)," which is from Middle French atabis (14c.), which is from the Arabic attabiya, from Attabiy, a neighborhood of Baghdad where the cloth originated. The neighborhood was named for prince 'Attab of the Omayyad dynasty (661-750 AD).

The same term applied to tabby cats is due to their stripey appearance -- the original tabby cloth had a striped or rippled appearance.

In today's weaving lingo, tabby is usually used more specifically, to be the plain weave ground a fancier pattern is tied down with. Overshot weaving often says 'alternate with tabby' -- you weave a row of overshot with its long floats, a row of tabby to lock it in place, and so on through the overshot pattern.

But with the amazing breadth of historical information on websites like the online weaving archive and the past issues of Weaver's Craft and Handwoven floating around online sale lists, you will often still see tabby used to mean basic plain weave. 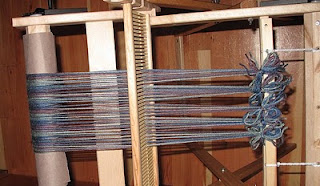 So it's no surprise that the term tabby creeps into my speech when I teach Weave Now: Introduction to Rigid Heddle Weaving. I have a new session starting up this week, January 16th, 2011, online (signups are on Weavolution), with classes on Wednesdays via webcam. I also have a local class at Peninsula Community College starting in February, on Tuesday evenings (sign up by calling the college, 360-452-9277, Course C-AE 053, item N145).

Interesting--I love looking into the etymology of fiber arts/textiles vocabulary.