What's your spindle made of?

I admit to being one of "those" people that pooh-pooh's spindles not made of wood. I love the warmth, the knowledge that my spindle was once part of a tree stretching out under the sun somewhere on the planet.

I haven't ignored other materials, though. I have a lovely stained-glass spindle that has withstood several slimmings of the spindle flock. And my very first bought-en spindle was a Mongold, back when they were still being made. Mongolds, if you don't know, are made of resin.

And now I'd like to introduce you to two of the newest members of the flock... 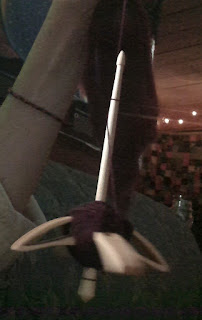 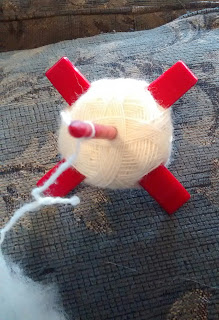 I have been enjoying a massive Turkish spindle crush for the past few years, especially after figuring out I could make one with pencils.

And these two spindles have been a joy. The Riley Sci-Fi, on the left, was purchased from Mielke's Fiber Arts (a long-time favorite stop of mine on the web). It is wood, and it has the type of modification I love to see on Turkish spindles, removing some of the intermediate arm weight. That is such a boost to the spin-time of a Turkish spindle, I can't say "Yay!" loud enough.

The Turtle Made, on the right, purchased from the maker on Etsy, is a 3-D printed spindle. I got mine in translucent red, because red ones go faster (really). It's both economical and a good spinner. I'm pleased to have finally taken the plunge to trying it, after resisting the thought of a 'plastic' spindle. It's actually made from PLA, a bioplastic from renewable resources. Pretty darn cool.

So, you see, spindles can be made from any (solid) material, as long as you enjoy it, it doesn't matter.

(The makers or businesses mentioned here did not pay me to write this or provide me with anything for this. Just so you know.)

What's your favorite spindle made of?

Related posts...
All the ones that mention Turkish spindles
Can you spin a sheep?
Which spindle spins the best?

© December 30, 2015 by Ask The Bellwether, posted at http://askthebellwether.com/

My only spindle is a lovely little Turk made by Ian Tait from IST spindles in the Isle of Wight. He also makes ones with brass insets in the arms to improve spin time, but I need to be a better swindler to get the most out of one of those.
I've tried a friends 3-d printed Turk and have to confess I didn't get on with it, I like a slightly longer shaft to give my fingers more room to flick and hold whilst I wind on.

It depends on what I'm spinning. For silk my favorite is a small toy wheel and dowel covered with a semi-irregular peyote stitch with three types of seed beads. It sparkles like mad in the sun. I also love my 3 Bosworth spindles (Holly with an oak shaft, Oak and Moose Antler with an oak shaft).

I love all my spindles. Most are made of wood,. My best spinners are the Moosie, Stella (wood shaft with a 3-D printed whorl) and the rim-weighted oak burl by IST Crafts.

I'm thrilled to see that you're enjoying my TurtleMade red (racer-of COURSE red goes faster!) I knew when we (my husband, Scott, and I) started making our 3D printed spindles that we would get pooh-poohed by a lot of the spindle community because they weren't made of wood. To the ones that try and don't like I say, "To each his (or her) own". No harm, no foul, no hurt feelings. To the ones that refuse to try, well, I'm not here to make you change your mind-it is your life, live it the way that you want to. To the ones that try and love it, I have a lot to offer, welcome to the slow-moving madness :D