Why should I care about twist? 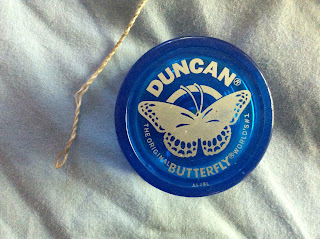 My nephew is visiting, and amidst my studio spring cleaning, I found a NIB Duncan butterfly yo-yo, so of course I offered it to him. He knew exactly what it was and proceeded to rip open the package and give it a spin.

Only to be sadly disappointed because it has been sitting on the shelf for too long. The string's twist had re-formed itself, and so when spun, the string will unwind, but then the yo-yo spins at the end of the string rather than rewinding back up.

A yo-yo string looks like a very tight 2-ply but is actually a folded cable — a 3-yard length of regular cotton string is taken, twist is added (a lot of twist!), and then it is folded on itself so that it cable-plies, with a fold at one end. That fold is really important, as it is then opened up a little and the yo-yo's middle pole is put there. That's right, your standard yo-yo is operating on a specially twisted piece of string. Each one has to be made for the yo-yo, since each one has to have that fold.

But any yarn left wrapped tightly on something long enough will lose its twist, and that's what's happened to this yo-yo string. The center portion no longer wants to be twisted on itself, so the yo-yo doesn't try to wrap itself up again once it reaches the end of its string on the unwind.

I plan to recuperate this yo-yo string the same way I wake up dormant twist in singles after plying: warm water. I want to see what it takes: warm water, or hot water, or even possibly steam.

Twist is always important to me in my spinning, and this little yo-yo string exhibits exactly what I caution new students about: dormant twist. When singles sit on your bobbin or spindle for even a weekend, the plying has to take that into account. You can use warm water to figure out what a balanced ply looks like, and then ply your yarn to match that sample. I talk about this further on several posts on this blog.

And, if that doesn't work, then I will make a new yo-yo string from a cone of non-mercerized 10/2 weaving cotton. After all, there's gotta be a spindle or wheel around here somewhere ...