How much weight will a Shetland fleece lose in washing? 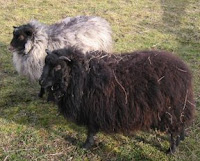 How much weight a fleece loses from raw to washed depends on many factors. If you want to be absolutely safe, order twice as much raw ... but you'll end up with over 4 pounds if you order 8, unless the whole thing ends up on the mulch pile.

If you want some generalities, in the Shetland fleece I've known, the loss has been closer to 30% -- after skirting. So if I had 10 pounds to start, skirted, I'd expect to end up with at least 7 pounds. (5 pounds raw, skirted should end up with about 3.5 pounds washed.)

Things that can go wrong --

I usually expect, to be safe, that from raw to roving I'll lose about 40% of the weight. If it's low-grease and clean, I might lose only 20-25%. If it's high-grease and clean, I could still lose about 35%. But 9 times out of 10 I end up "re-skirting" almost every fleece to save myself some hassle (or broken drum carder teeth) in carding. Shetland's typically a "mid-grease" fleece, in my experience.

(posted by me on Spin-List, this day)
by Amelia of Ask The Bellwether