How do I remove singles from a spindle? 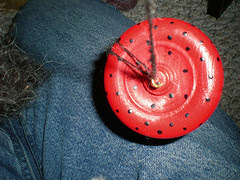 Juls asked me a question about my Knitty article, Notchless Top-Whorl Spindles.

...I find I am stumped on the step before plying--how to get the yarn off the spindle! As I tried out your technique, I was unsure how to unwind it after the spindle was full. I have the one end around the hook, and one end dangling after being spun. What next? ...

I'll usually fill two top-whorl spindles and then lay them in a tray and wind a 2-strand ball straight from both spindles. Then, I ply from that 2-strand ball. Abby F. had a great article on Spindle Plying on Fiber Femmes a while ago (go and read it, I'll wait).

Now, I have plenty of spindles sitting around to do this with; if you only have one, you'd want to slide the first cop (the singles wound on the spindle) off the spindle, but you're right, to do that, you'd need to snip the beginning-end that's still on the hook. A small pair of sharp scissors could snip carefully right near the hook, take care and you will not damage the spindle.

If you're concerned about the de-spindled cop getting messy during the re-winding, then you might slip it from the spindle directly onto a knitting needle or a straw. That will give it a "core" to hang onto.

If your spindle won't let you slide the cop off, because it's larger on the bottom than along its length, then you'll need to wind it into a single-strand ball to empty it the first time; the second time, you can wind the spindle-full and the ball into the two-strand ball to prepare for plying.

When you're winding the ball, the spindles will bounce around in the tray a little bit, but they can take it. If it worries you, lay a towel in the tray and then put them on top of that -- but watch that the fiber coming off of the spindles, or the spindle hook itself, doesn't get tangled in the towel's fibers.

Once you have the two-strand ball, you ply directly from that. So, it's important to maintain even tension in the strands as you're winding the ball, or you'll end up with little pigtails in your plied yarn where one was longer than the other.

~~
posted 16 January 2009 at http://askthebellwether.blogspot.com/
by Amelia of Ask The Bellwether

Thanks so much for answering my question...you inadvertently answered another one of mine too by explaining about the re-winding. I had been sliding the cop directly down onto the lazy kate and I find it is not feeding at the right tension for me to ply. Sounds like I can do a little more prep work with the singles before attempting to ply. Thanks!!!