How can I fit more yarn on my bobbin? 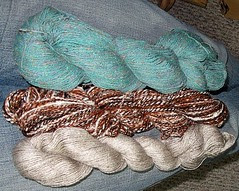 Wheeeee! As you all know, I'm having too much fun with my new Bee wheel :)

There's nothing like having an open threading for being able to interrupt a plying job in progress to head off to my LYS to teach some new spinners (they all 'graduated' today -- three more spinners in the world, yay!) 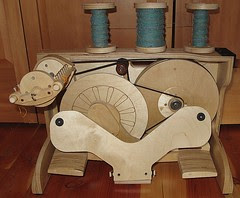 As I mentioned in my review of the Bee, it does have travel-sized bobbins (ummm ... that's a euphemism for small, folks!) Not too tiny, probably a hair more volume than Ashford's standard bobbins, but definitely smaller than Majacraft's very healthy bobbins. I got 2.7 ounces of 2-ply light worsted weight on a Bee bobbin: it came to 152 yards, which is 900 yards per pound if you think about it that way. That's the black/brown/white skein in the middle of that upper shot. In today's test, I got 3.95 ounces of 2-ply laceweight on a Bee bobbin -- that came to a hefty 570 yards, so about 2300 yards per pound. That's the blue skein in the upper shot. The other one? didn't fill a bobbin -- 2 ply of even finer yarn, 2 ounces, 418 yards, so, 3344 yards per pound. Wow, I impress myself :-)

I used all my methods for maximizing bobbin contents in filling these, so it's worth sharing them with you. Be your bobbins large or small, these can help maximize your yardage on your bobbins.

Is there something you do, to pack more yarn onto your bobbins? Please post it in the comments -- I'd love to learn some new ways to get maximum yardage on my bobbins!
~~
posted 17 March 2009 at http://askthebellwether.blogspot.com/
by Amelia of Ask The Bellwether

Wow, the Bee looks really neat! I've been saving up for a Majacraft Rose...how's does this compare?

OH WOW!! what a beauty. But not sure if I have room for another wheel, even a folding one :( I have an Ashford Joy and find that the orifice is a bit low, so I'm inclined to lean forwards, bad for my back. This wheel looks taller, what's the orifice height?

I haven't written before, but I love your blog! Thanks for the great tips on filling the bobbins... can you believe I never noticed the offset on the 2 arms? I am self taught, and have reinvented the wheel several times...

I don't really try to pack on my bobbins, but when I spin on my Ashford Joy, I ply on my Louet. It has monster bobbins!