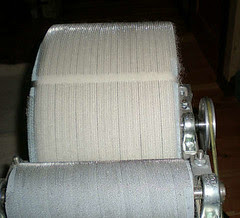 I have a PG Supercarder -- its one plus over the other electric carders is that it has 3 drums rather than the usual 2, so the wool is really well-carded in just one pass. Also the teeth on the cloth are at an angle so you can easily take off roving rather than a whole batt (though for overall speed, the batt's the way to go). I don't have a problem with the drive stuff not being covered, but I do keep my children away from the machine and a box over it, power switch locked with a padlock, when it's not in use.

If you are carding a medium wool generally, you may be satisfied with just 2 drums on the carder; the Patrick Green FanciCard is very similar to the SuperCarder, with just 2 drums, basically, so that's a less expensive option.

I considered recently whether a double-wide Duncan or similar wider-model drum carder like the Strauch double-wide would be better, but decided against the "widening" of my drum carder since it would have 1 less drum and be a little less effective at carding. Since I'm mostly carding medium-fine fibers on mine, I decided to stick with the SuperCarder.

Also, upon researching, I found the wider drum didn't give larger batts -- because the diameter of the drum was smaller than that of the SuperCarder. So, it's the overall surface area that matters, and the Duncan doublewide's surface area produced a batt about the same weight as the SuperCarder's.

If you're interested in processing rates -- I could get about 2-4 ounces onto the SuperCarder/into one batt at a time, and could do about 2-3 batts an hour, 4 if the fiber was really well teased open beforehand and low VM (so not much picking through to do as I was carding). I honestly think it would be difficult to use the tabletop motorized carders as a way to process fiber for sale in a sustainable manner, unless you are carding high-end fibers that have larger margins/retail value or processing the fiber to sell to support your own hobby needs. But I did talk to a lady once who said she was regularly carding over a pound an hour on hers.

In final, I'm very happy with my SuperCarder. I think the Duncan and Strauch double-wide models are fairly comparable to it, but as they have just two drums, you may find the SuperCarder gives you a smoother batt the first time through. It's harder to test-drive a drum carder than a spinning wheel, though if you can, that's a terrific way to find out what's the right carder for you.

~~~
Interested on more posts about drum carding? See these...
How do I card a smooth batt?
How do you take roving off a drum carder?
What are a doffer brush and a burnishing tool used for?
When do I use oils in carding?
What's the difference between roving and top?
What's the difference between batts and roving?
I washed the fleece, now what?
To Drumcard, to Handcard, or to Comb?

For Drum Carding eye-candy, see my flickr set Get Batty.

~~
posted 23 March 2009 at http://askthebellwether.blogspot.com/
by Amelia of Ask The Bellwether

Did you know that I like your drum carder? And, I think you did a good job.

I cannot afford the Supercarder at $3000.00 but have been saving for a Fancicard at half the price. Thanks for the info!

Where are you located? I am interested in the processing fiber for needle felting small animals. I just went to the wool and fiber show in Oregon City...I love the Duncan drum carder but I really cant afford it. Have you heard anything about the Kitten Card Drummer? Its $200 less.Would love to hear from you. laurie lm.sm@comcast.net

This is just the question I've been asking myself. And I will be carding alpaca which is a higher end fiber. I'm angling for the PG Supercard and am hoping to try one out soon.

I have a Duncan 16" electric drum carder and adore it. I don't mind putting my fiber through a couple of times as compared to the SuperCarder...

It can card anything I put through it, and I've been extremely pleased with customer service from Dick and Joane as well.