Of Pickup Sticks and Weaving Drafts 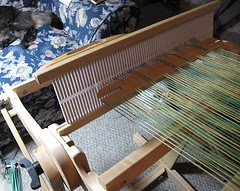 Wow! I honestly didn't realize how much I had bitten off when I said part three of these posts on applying weaving drafts to the rigid heddle loom would be using pickup sticks for more complex patterns. Luckily for both of us, the other evening as I was falling asleep, a golden nugget popped into my head. But I leap ahead ....

ETA: You might want to start with How can I use weaving drafts on my rigid heddle loom if you landed on this post first ... for the introduction to this topic. And part 2, What can you weave with 2 heddles... may be useful background too.

My basic premise in looking at a weaving draft is whether or not it has something that looks like plain weave floating through it -- 1/3/1/3/1/2/4/2/4/2 for example has these repeating pairs that tell me there might be some possibility there for the rigid heddle loom.

by Donna Muller, my thoughts have been of those.

David Xenakis did Huck on the Rigid Heddle in Huck Lace: The Best of Weaver's

, and I'd already done my Bronson Spot experimenting on a four harness loom, so that left Swedish Lace.

Swedish Lace is interesting; I read either in Muller or in Marguerite Porter Davison's A Handweaver's Pattern Book

that the traditional form uses just one form on the front, be it just warp floats or just weft floats. Though Muller explores mixing the floats so that the font and reverse of the fabric are siblings, if not identical.

The main issue with the mixed form and the rigid heddle loom is that it has two plain weave strands next to each other and uses one shaft for one base thread and a different shaft for the other -- possibly doable, but more than I wanted to bite off. If you try to mimic the warp & weft floats being side by side without changing from the default threading, they get a little mis-aligned, off by one strand. At least, they did for me, so I abandoned that experiment.

Tradition is good, right? So the scarf I've just finished for you uses the traditional approach, and in this case, warp floats on the face of the fabric.

Now, to figure out pick up sticks for weaving drafts, it helps to have not only the threading, tie-up, and treadling as I showed you in the first of this series, but also the missing fourth part -- the draw down. This section shows how the warp and weft will interact, so you can see warp floats and weft floats.

Here is a very simple Swedish Lace draft (only one block of the lace, imagine it repeating to the left many times) with the draw down filled in: 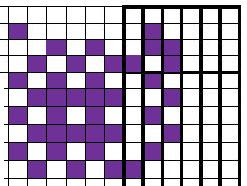 Now, we need to talk about pickup sticks. You could thread a pickup stick through in front of the heddle, turn it on its side, throw the shot through, and then remove the stick. But that sure sounds slow, doesn't it?

I'll offer you instead the style used more often today. Betty Linn Davenport teaches this method in her book Textures and Patterns for the Rigid Heddle Loom

To decide which threads you want to pick up, you need to decide if you have warp floats or weft floats. As you can see in my draw-down, I have warp floats, the purple bands that are vertical. And if I look in the threading pattern, I see that one "plain weave" throw is split between harnesses 2 and 3 -- two in harness 2, one in harness 3. The two strands in harness 2 are my warp floats.

So, I push the heddle down, and thread a pickup stick across behind the heddle, under 2, over 1, under 2, over 1, across. The stick goes under the warp float threads, and over the ones that won't float on top. I'm going to say this another way too, which will be more important later: the warp threads above the pickup stick, are the ones that we want to have be over the weft yarn. 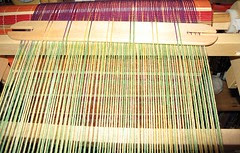 My apologies -- these pictures are based on a slightly different experiment, separating each Swedish Lace motif by a square of plain weave (sigh). Also, my pickup stick is a spare shuttle -- creative reuse at its finest.

Then, when I weave, I can leave the pickup stick at the very back of my loom (in neutral, out of play, at rest -- pick your favorite term) as shown in the picture above, and lift the heddle up and down for regular plain weave. When I want a Swedish Lace motif, I can get the right threads to move up and down, matching the treadling, like so:

This gives me one complete Swedish Lace block across my weaving. If I want multiple blocks, I can continue repeating these six shots. The sixth shot is very important, as it ties down the warp floats.

Now, the really cool thing about pickup sticks and motifs like this is that you can build complex shapes by simple shifts of the pickup stick. For example, if I want a diamond of Swedish Lace, I can start with just a pair of warps picked up to start, do my six rows, then add two more pairs on either side (always separated by one not-picked-up warp thread, to provide the tie-down needed for the weft), and keep repeating this -- six rows, expand the pickup, until I'm ready to start decreasing for the back of my diamond.

On a harness loom, this takes planning and foresight -- each Swedish Lace motif would have to go through its own pair of harnesses so you could choose to lift just one motif at the point of the diamond, and then lift more ... so you see, you can mimic very complex weaving on this very simple loom.

The pattern I did, a trapezoid at the end of the scarf, would have taken a 12 harness loom. There is no 12 harness loom in my house (yet!) so this is pretty cool!

But wait, you say, what about weft floats?

You would still lower the heddle to pick the floats out of the yarns in the holes. And now I'm going to repeat something I said would be important later -- now is later! Once again, the warp threads above the pickup stick, are the ones that we want to have be over the weft yarn. So you pick up the warp threads that will be over the weft when it is otherwise floating.

If we reverse our Swedish Lace Motif to get the other side as the top pattern this is the draft: 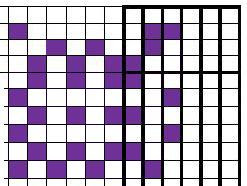 So now you see what I want to thread is the reverse of what I threaded last time: the pickup stick goes over 2 strands, under 1, and so on across.

Because I'm doing weft floats now, my heddling is different as well:

In fact, I can show you what this looks like in fabric, since it is the reverse face of my scarf. (Sorry for the low quality photo ... I'll try again once it's pressed.)

Now, if I wanted to combine the two motifs, I would find them off by one warp thread, as the two tie-ups, used in combination, need a more complex threading. I haven't decided to tackle that whale, but if you do, I'd love to hear what you learn.

Oh, and this is my golden nugget:

If you want warp floats, then the pickup stick is pushed up to the heddle on the up-heddle shot. If you want weft floats, then instead of pushing the heddle down, you turn the pickup stick on its side and make the shot between its raised threads and all hole threads and non-picked-up slot threads. Look at the draw down to see where the floats are.

The easiest patterns have only warp floats or only weft floats -- for a mix, you may find you have to pick one as the permanent pickup stick, and the other as a pickup stick that is put in when needed but then removed to let the other pickup stick be used. That may still be a reasonable thing to do, for interesting weaves like waffle weave, with several rows of warp floats and single rows of weft floats.

Now, I'm off to re-read Davenport to see how much of the theory she goes into. I find I get more out of my books after I've spent some loom time exploring their techniques.

Next up on rigid heddle loom posts will be an answer to Dorothy's question, How do you do floating selvedges on a rigid heddle loom? Oh, and an emailer asked me about online rigid heddle resources -- I've listed a few in my other posts, but if you have some you like, let me know, I'll be sure they're in that post :)

posted 15 March 2009 at http://askthebellwether.blogspot.com/
by Amelia of Ask The Bellwether

I also have wondered about using heddle bars (like used on backstrap or Navajo looms). I have woven double weave using 2 heddles and once I got the threading right, wove off easily enough. The looms are far more versatile than people think.

I just finished reading this post because...well...I real *all* your posts. You're knowledgeable and articulate and I learn something new every day.

Not today though. This post was like reading Cyrillic. As you can probably guess, I'm not a weaver. This post reads like ancient runes to me. But I'm interested in learning a little bit so that I don't have a blank look on my face when in the presence of weavers (many of whom are in my knitting group.) Could you recommend something at the very beginner level for me to get a grasp on the subject?

@Susie ... sorry about that. As a third part, it's pretty thick with preconceived notions. You might want to start with How can I use weaving drafts on my rigid heddle loom if you landed on this post first ... for the introduction to this topic. And part 2, What can you weave with 2 heddles... may be useful background too.

Betty Linn Davenport's Hands on Rigid Heddle Weaving discusses how to use the looms, and Deb Chandler's Learning to Weave is a good general introduction to using weaving drafts, albeit on multi-harness looms, not rigid heddle looms. AFAIK, that book hasn't been written ... yet ;-)

Finnally an article on pick-up sticks and pattern drafts that I can understand, even tho I will need to reread. Thanks and will save it. Marty, a beginner weaver.

I agree with anonymous, you do great work explaining how to do what I want to do. Thanks!!

From Marty. Okay I have been practicing patterns with the pickup stick and have needed to take out the weave at times. Question- is the pattern supposed to look the same on both sides of the woven piece.

Thanks all for the terrific feedback; I admit, weaving is full of its own terminology, just like spinning. Learning the lingo can be half the battle!

@Marty: the patterns will look different on the back side, mostly -- what is a weft float on the front will be a warp float on the back. If your weft and warp fibers differ, the two sides can look quite different. Donna Muller explored this quite a bit in her book, Handwoven Laces (whose focuse was for an 8H or more loom, so really off-topic for the rigid heddle weavers ... )