How do you wind a ball?

It's interesting to note the things people ask. For instance, I often get asked, How do you wind on a Turkish spindle? So, I went through all my spinning books to see what they said. Do you know what they said, when they mentioned Turkish spindles? "Wind on." Hmmmm. Okay, that leaves out some of the details. But that answer has already been blogged, so let's look to the next "obvious" task.

Similarly, we're expected to know how to wind a ball. But, if your mother wasn't crafty, and there was no aunt or grandma around who was, maybe she didn't show you how to get one started, or how to keep it round.

Now, this is a handy spindling skill -- the Peruvian plying ball is my preferred way to ply. The time spent winding is more than recouped in plying. And, the way you wind the one-strand ball is the same as how you wind this two-strand ball (just with one strand...).

First off, the Peruvian plying balls are 2 strands held together, so I'll assume you have two cops of yarn, either on two spindles or pushed onto straws or knitting needles. Or, two single-strand balls. Hold the two strands as one as you wind. I'm a righty, so I'll write this that way ...

(1) Pinch the two strands together in your right hand. Wind them around the first two fingers (index and middle) of your left hand -- as you wind, the pinching right hand fingers slide back, maintaining tension on the yarn; the initial winding is held on by the windings about it. Do about eight complete rounds of your fingers. Then, slide that mass off your fingers; it's the core of your ball.

Some people start with a small ball of felt, wad of paper, or even a golf or tennis ball rather than this self-created core. Then, you can wind around that foreign object, rather than your fingers.

(2) Now, holding the core in your left hand (I pinch one end of it), wind the yarn around the middle of the core, tightly, about four times.

(3) I (note, I'm not Peruvian...this is my own method, they may do it differently) then fold the core in half over that winding, and then wind 4 more times tightly over the folded-in-half core.

Take that last winding 4 times around as your first "course", or path, around the ball.

(4) From here on out you wind courses, which basically means to wind on the same path several times, then move to a new course. The bigger the ball gets, the more times around on the same course you can go. Wind a course any way you please, then rotate the ball any way you please and start a new course. Some people get quite methodical and rotate only slightly along a central axis for a very tidy ball that is more of a cylinder shape. Others go fairly randomly, but aim to have a very round ball.

It's not really meant to be hard, or scientific -- it's just winding a ball. But if you haven't done it, it can be as hard as learning to tie a shoe (which I waited wayyyy too long to teach my kids!) so don't sweat it, just wind it. I think the key things to a Peruvian ball are winding tightly, and winding on the same path several times to create a "course". This is what lets you pin it to your shirt as Abby Franquemont mentions in her article. If you wind a two-strand ball on a ball winder, you don't get courses, as each path around is slightly off from the next one, in tidy mechanically-organized paths. 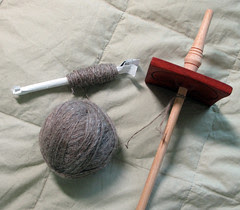 Now, one spindleful may have more yarn than the other -- at that point you can use an Andean plying bracelet to finish off the longer one, or if it's on your spindle, simply break off the extra to start the next spindleful.

This was based on a PM response I sent on ravelry on 17May2009 -- and this information, along with speed plying from the Peruvian plying ball, can also be found in my new book, Productive Spindling :-)

~~
posted 19 July 2009 at http://askthebellwether.blogspot.com/
by Amelia of Ask The Bellwether

Interesting that you mention winding tightly. If you don't use the ball of spun fiber (singles, yarn) right away, won't that stretch the yarn? When I wind, I have two fingers of my holding hand in the path of the course I'm winding and wind over those fingers, introducing a little space to allow the yarn to return to a rested state.

@FiberQat: that's a good point. If I'm winding a ball to knit from, I keep a finger under the current course as I wind it, to build in some "give". Plying balls, though, I wind tightly. It's okay to do so -- the only side-effect I've seen from that is that the twist in the singles gets set fairly quickly if I leave it a few days before I ply; it's about the same tension that the yarn was wound onto the spindle or, on a wheel, wound onto the bobbin -- so it's the same effect you see there.

I also used to wind balls this way until I realised that these balls move around so then I wanted centre-pull balls. I use - yes, believe it or not - a 5 inch length of 10mm copper pipe- I put about 4 cm of yarn down the tube then procee to wind yarn around the pipe,moving the pipe round at the same time so the yarn makes one of those really professional-looking balls. Then I slide the balloff the pipe, pulling the short length out of the tube first, and that becomes the start of the yarn. These balls just sit there, especially if you've wound them to have a kind of flat bottom! You can put a couple in a box with holes in the lids for plying and the balls wont move about it the box; also,for knitting,you can have your centre-pull ball in your little project bag, or next to you, and know it will stay put.