How do you wind on a stick shuttle? 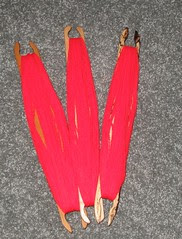 When you're starting out with rigid heddle weaving, your loom likely came with a simple stick shuttle. The instructions might have told you how to warp the loom and weave, but they have a tendency to gloss over one of the steps: how to wind yarn onto the stick shuttle.

So here's my little guide to help out ...

Start by making a figure-8 shape with your yarn around just one side of the stick shuttle. The pictures here show what it looks like from the winder's side, from the other side, and on the edge. The very end of the yarn is "trapped" under the first complete go-around, and gets further trapped as you wind more figure-8's.

First picture ... the first winding, from the weaver's point of view:

Second picture ... the first winding, seen on the edge of the shuttle:

Third picture ... the first winding, seen on the underside of the shuttle (thus the awkward hand position...):

Okay, got that first winding on? Then you continue winding, repeating the figure-8 on the same side of the shuttle, until it is full. You get to say what full is. A few guidelines: you're going to be filling the other side, too, so keep the yarn on its side in the cut-out ends; you might want to put a set yardage on, so you know what length you'll be weaving from it; or always wrap the same number of times, so you know you'll get a consistent length of fabric from it.

Here is the same shuttle with one side full, the same three views. First, from the weaver's point of view:

Then seen from the edge of the shuttle:

The flash washes out the strands a bit, but you can kind of see how they cross over each other, back and forth, in that figure-8 shaping.

And the final shot of the full side, seen from the underside of the shuttle:

Now, once you have that side done, you might want to stop, if you are using your shuttle to pack your weft as is done in backstrap weaving. But on a rigid heddle loom, you don't have to, since the heddle is used to pack the weft in place after it is placed. So, you can wind figure-8s on the other side of the shuttle too. Once the first side is done, continue on over to the empty side, like so: 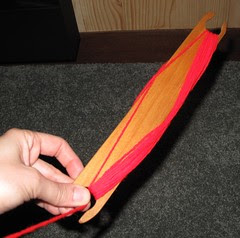 Once you have the figure-8s started on that other side, wind more on that side until it, too, is full. Again, you might want to count so you always wind the same amount of yarn on your shuttles.

Once the shuttle is full, you can stop. Or, if your rigid heddle loom gets a decent shed, you might pack some more yarn on, winding straight up and around the middle of the shuttle. Here I've stuffed all three of my shuttles in preparation for weaving: 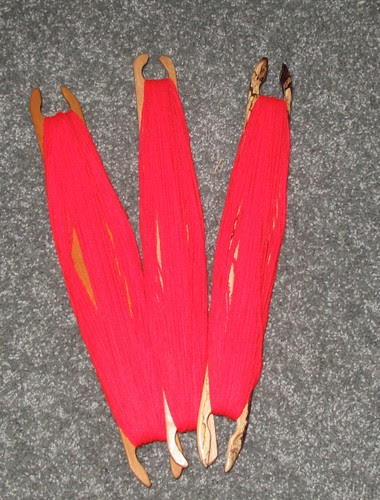 And here is my Glimakra Emilia Rigid Heddle loom, where I'm weaving a scarf with these shuttles. For more details, see my project named the red scarf on Weavolution. It's warped for plain weave, with pairs of doubled warp yarns evenly spaced across for a little textural interest: 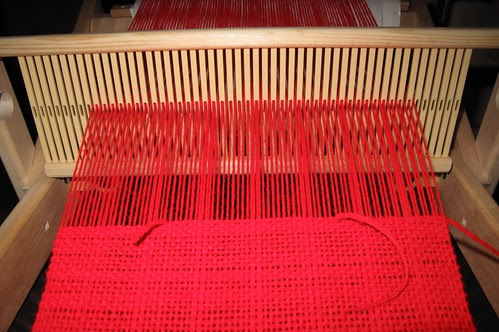 And here is the requestor of the scarf, off to give the llamas their hay in the early morning chill: 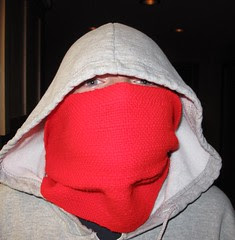 If you've more questions about winding on a stick shuttle for your Rigid Heddle weaving, just let me know. Different people wind differently on their shuttles -- there is no one correct way, so feel free to experiment and see what works with your stick shuttles and your looms.

~~
If you'd like to see the pictures all in one place, they are up on my flickr set, How to Wind on a Stick Shuttle.

As always, what you post is very helpful......thanks, Amelia!

I just discovered your RH Tumblr... Thank Heavens for You!

Thank you for thinking of posting this instruction! I just wish I had seen it before I wove the last two table runners! My weft yarns kept winding off the shuttle - probably because I am weaving mostly by the seat of my pants and had no clue there were tricks!! So happy to have this information!

Can you tell me what the advantage is to winding in a figure 8 instead of just going strainght from end to end?

@Judy: the figure-8 wrapping lets you stuff a bit more yarn on for the same height of fiber on the shuttle -- you can figure-8 wrap both edges, and then wrap around the middle on top of that.

Most rigid heddle looms' sheds are not that big, so packing more on in a lower profile can be handy -- more weaving before you have to refill the shuttle :)

I can't believe I found this. Thank heaven for Google. For some reason I just couldn't get the 8 correct. This is my first try at weaving. It took me all day to warp the loom. Now I am anxious to start weaving on my little table top rigid heddle loom I bought in 1972 and never used. The photos are a great help for winding which was puzzling me.