How far can you weave on the rigid heddle loom?

Usually, I'm weaving scarves on the rigid heddle loom. That means I end up judging how much warp to weave into the header (for later unweaving) and how much to leave unwoven at the other end, so that there is sufficient warp leftover for fringe. Typically, for me, one end is entirely used up, and the other end gets about an inch trimmed off of it to match it up. I suppose if I took notes and measured, I could even get rid of that inch -- but my weaving stays more casual than controlled, so I've not kept a notepad handy in my weaving kit. There is a tape measure there, though.

But recently, I was inspired by a confluence of events (ahhh love those big words) to try something new. The events:
Yeah, there's more to this project than even that list -- the sett square test led me to use a strand each of royal and dusty blue, which reminded me of a lovely Handwoven Scarves

scarf of two plied strands. So that got pulled into it, too -- I loosely (1 TPI) plied the strands together on my wheel. The effect is marvelous. And yes, it does make a difference: unplied, plied S, plied Z -- each has a different result. But today the project is still mid-weave, since the wool one is warped (during the presentation -- so lots of helpers, which came in handy when the ball tangled!) but not woven off yet.

Today, to return to the topic at hand, I was finishing weaving the cotton "yardage". How far did I get?

Things were getting pretty touchy as this last shuttle got closer to empty. As you can see, I've advanced the back dowel over the backbeam, and toward the heddle. There's not much room in front of the heddle -- little more than the width of the shuttle. It's possible I could fit about a half-inch more of weaving on here, advancing the warp a little more and threading the shuttle through the skimpy shed at this point.


The closer the back dowel gets to the heddle, though, the smaller and more disorganized the shed gets. Why disorganized?

Check out this behind-the-heddle close-up. 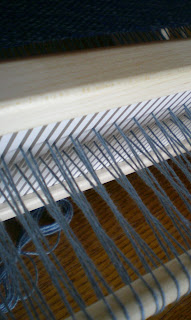 What you see here are the warp threads wrapping around the dowel. So, some are coming from below the dowel, and some above. The warp threads that go through the holes in the heddle are closely controlled and line up. But the warp ends in the slots end up in two different heights at this end of the weaving -- higher ones coming off the top of the dowel and lower ones coming off the bottom. Which it is, is pretty willy-nilly, since the warp is threaded through the holes after it's all wound on the back beam, conveniently obscuring which side of the dowel the threads are coming from.


You can also see that the threads aren't anywhere near the top of the heddle slots, either -- they are close to the holes. They get closer and closer as the back dowel is advanced between the back beam and the heddle, as that limits the angle they can move through. 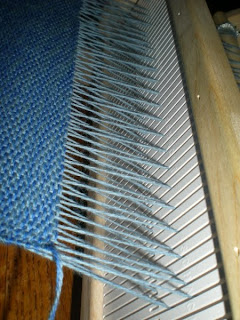 Here's a shot from the front, so you can see it from the weaver's view. It's tricky, sliding the shuttle through that narrow gap with variable height on the upper warp threads. When the heddle is raised, it's a little easier, since the holes pull all their threads above the wonky slot warp threads.


In all, though, the last inch or two was an exercise in "not fun". So, when the shuttle was empty, I declared it done, hem-stitched it, and cut it off the loom. It's waiting on the washing machine to be run through with the Wednesday laundry before sewing it up into the first of the pair of totes.


I asked my friend S, an expert weaver of many decades, for advice on finishing and sewing. For this cotton one, she recommended washing the yardage, seaming the selvedge sides up with antique stitch rather than having a seam allowance, and then washing the sewn tote.

The amount of warp remaining was shorter than I would want for a scarf fringe, and too short to save as skein ties or any other secondary purpose. The warp leftover at the beginning was a little longer, about an inch, because I'd used a fair bit to tie bows at the tie-on rather than knots (another experiment - they held great, and came apart much easier than knots). There was probably less than a half ounce/fifteen grams total weight, from both ends. I may experiment with lashing-on next time to minimized waste at the front. Maybe I'll re-tie the wool one that way ...

~~~~
Curious about the details like heddle used, width and length on the loom? I've posted this on Weavolution as a project (named Twisted Tote) to provide that information.

For plenty of Rigid Heddle news, keep up with The Rigid Heddle on tumblr. It's a weblog linking you to all the rigid heddle sites and notes I come across online. Great fun!

Great article - I've been wanting to do Doni's Deli bag, too!

BTW, what's "antique stitch"? I've not heard of that one before!

@Adrienne: I found a blog showing the type of stitch, Bonnie Tarses' blog, this post: http://weavingspirit.blogspot.com/2009/02/woundrous-blanky-comes-together.html
She doesn't call it antique stitch -- my friend S called it that.

Oh, great. Now you've got me thinking about weaving velvet on a rigid-heddle loom.... ;>

Your handspun for the deli bag has me intrigued, I love the wave effects! I wonder how much it would show up once the item is fulled or even felted slightly? The tote has been on my to do list for a while; its more than time I got started! And don't even talk about velvet ................there are some wicked enablers around, ;-)! Cheers, Caroline

@SpinningDownUnder ... thanks for the input! I should point out for accuracies' sake that all I did was ply together two strands (different colors) of commercial 6/2 cotton. Someday, someday, I will spin enough cotton for a completely handspun tote :) Not, I think, this year, though.

Because it is cotton, the washed fabric reads pretty true. Yep, it's washed now! yay! the machine broke down half way through the cycle and I have to get a new one, but we won't talk about that, it just kept things exciting around here. All the washing did was help the threads puff up a little bit to fill in the "screening" of the weave, though because it was cotton, I beat it a bit harder (a Pat instead of a pat) with the heddle, knowing it wouldn't felt, just full, in the finish.

Now, the wool one (#2), is feltable wool, and is plied 2-strands of different blues (commercially spun & plied, though). It will be interesting to see what color effects that gives the weaving, and, as you say, how well they survive the felting. Bag #2 will be felted, not just fulled. But first, it must be woven. It's warped, at least, so progress awaits!

@Adrienne ... I looked it up and found it in the book A Compendium of Finishing Techniques, as Antique Stitch. She said it's also called Baseball Stitch. Googling "baseball stitch" gives quite a few hits and some good images showing how it's done.