It's a sign of my vacation that it's taken me two days to announce this: the first 100% result on Productive Spindling: The Treasure Hunt has been received! Woot! And who was the clever duck? Sarah M. 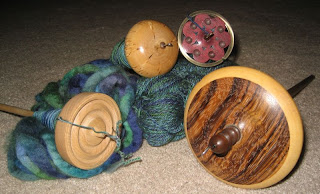 Left to right, they are a 0.9 ounce maple Charis, a masur birch Greensleeves Loki, and a 0.8 ounce purpleheart Golding tsunami, all working on a 3 ply sock yarn, and a 1.4 oz maple and zebrawood Kundert waiting to ply the second skein. Notice the lovely first skein they are resting on -- well done, Sarah!

She added in her response: "However we're building our roster and interviewing new candidates, particularly in the 1.5 to 2 oz weight class. The Kundert and Charis are my vetrans who have been with me since the beginning, and the Golding is a very talented rookie backing up the Charis who is proving to be more than just a pretty face." It's clear she loves her spindles!

Her favorite section is also several other responders': Productively Filling a Spindle (see the whole Table of Contents).

Sarah's favorite picture is the cover photo, for showing off all those pretty spindles so well. Natalie (my daughter, who arranged and took the picture) was pleased to have it favorited by our first 100%-er.

No, I won't tell you the rest of her answers, because there's still plenty of time (until September 1, 2009) to get your answers in! See the questions here.

So if you're nearby, check them out!

~~
Next up: something different ... carding and spinning a striped batt!
~~
posted 7 August 2009 at http://askthebellwether.blogspot.com/
by Amelia of Ask The Bellwether