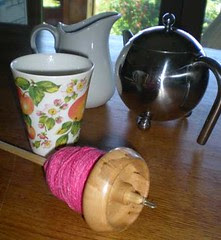 Ummm ... how'd it get to be the 14th, already? That was a blur -- Oregon Flock and Fiber brought September to a roaring end, then I hopped on a plane to Colorado to drive to the Taos Wool Festival with my mum. What a hoot! We had a great time, it's wonderful to be a grownup with your mother at your side. It's been a whirl of wrap-ups since, here at home. But the laundry's done, the email's caught up, the orders are back on track (thanks, customers! you're great!!) and finally I can get to this item on my todo list:

So with apologies for the delay and without further ado ... 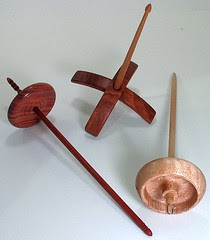 I do hope you've enjoyed the Treasure Hunt as much as I have. Thanks for playing!

If you haven't seen Productive Spindling yet, I'm pleased to announce, not only can you purchase it from The Bellwether and many other fine retailers, but your local yarn store may be able to procure it for you through their book distributor (Unicorn Books distributes in the USA and Gemini Fibres in Canada), and it is also now on Amazon

! woot! Amazon only orders theirs from me when they have purchases, so far, so if you have a copy, go there and submit an "I own it" note (at the bottom of the product page) and a review, to encourage them to have a few on hand for the next person who'd like a copy. Thank you ever so much!

I bought your book at OFFF from Carolina Homespun! Thank you so much for all this info in one place. I'd looked at other books from the library, but a lot of times the spindle is just considered as an intro to a wheel. I don't want a wheel! (yet?)

I'm a new spindler; I bought a Turkish Delight from Jenkins Woodworking at Sock Summit. Now I have a Kundert that I bought from Carolina Homespun at the same time I bought your book. Fun!

Excellent news that your book is available through amazon.com, this means anyone with an Amazon account can easily purchase it online and have it sent anywhere in the world ;) I wonder if I can wait 'til Christmas...

I took your beginning spindling class at OFFF and I'm hooked! I finished the white fiber you gave us and it looks like real yarn -- I can hardly believe it! I'm halfway through the brown fiber, I've bought two spindles (still waiting for them to arrive), I've bought some fiber (and am trying to exercise some self-control here, but it's really difficult), and (I NEVER thought I'd say this) I'm looking into learning to spin on a wheel. Thank you so much -- I think! Now, off to order the book.